It started back in February, when Bruce Stell, from Missoula, who is a rifle hunter, decided that he wanted get back into bow hunting after 15 years.

Stell is 67 years old and retired. For the next few months, he dedicated his time to focus on practicing with his bow. By late spring, Stell felt he was ready for his first bow hunting elk trip. To assist him, he hired Jack Billingsley Ranch Outtfitters in Eastern Montana. The first ever bow elk hunting trip took place on opening weekend of archery in Montana and it would be a hunting trip that Stell or his guide Rob won’t soon forget.

“We started to hunt in the morning opening day trying to spot some elk so we could do a stalk, but we didn’t see much, so I decided to sit in a blind by a water hole for the afternoon hunt”, said Stell. The ground was wet around the watering hole and Stell, and his guide, Rob, spotted up some fresh tracks of an elk that had been there earlier in the day, with any luck it might be back.

It was late afternoon on opening day when Stell got his first sighting of an elk. “I had been sitting in this blind for a couple hours and was about to give up and head back to camp when I spotted a bull elk coming without hardly any hesitation to get some water”, recalls Stell. The 6×6 bull elk stopped at 41 yards away from Stell and started to go about his business drinking water.

Stell, who had practiced for about 6 months shooting a bow to get ready for this opportunity, was in awe to be that close to a bull elk. “I couldn’t believe it was happening, and I got “Buck Fever” or “Bull Fever”, so it took a few seconds to calm my nerves and excitement down so I could concentrate on making a good shot”.He did, as the arrow grazed the bottom of the elks heart.

The elk took off running straight up a ridge to an embankment about 300 yards away from where Stell stuck it with one of his arrows. “The elk was starting to show the effects my shot and looked to me like he was going to lay down when he fell over the other side of the embankment which had a 25-30 foot straight drop-off”, Stell said. 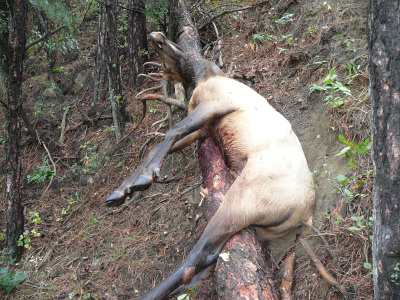 When the elk fell, it landed on tree. The weight of the elk broke the tree off, and the elk somehow ended up straddling the tree as he road the timber down the to the bottom of the embankment. By this time, a storm was fast moving into the area and it was loaded with thunder, lightning, wind and rain.”All of a sudden the sky opened up and it started to pour down rain”, said Stell. The rain didn’t stop until early the next morning.

Stell and his guide Rob had their work cut out to free the dead elk from the tree that it become trapped on as it slid down the embankment. The treacherous terrain, which was now one big pile of gumbo, was almost impossible to navigate across. “We finally were able to cut the elk off the tree and get it gutted and caped out by early morning” said Stell. The country was so saturated with water that it wasn’t until Monday that the ground started to dry and Stell was able to head back to Missoula.

The 6×6 bull elk was the only elk that Stell saw during his hunt! To view more pictures of his elk straddling a tree and more, click HERE.