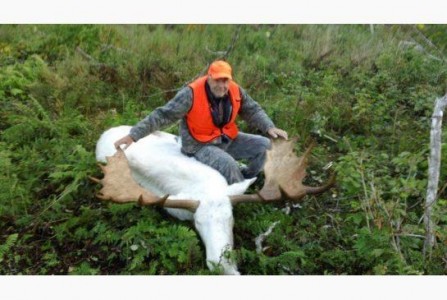 Moose hunters in the Cape Breton Highlands of Nova Scotia recently came under criticism from one of the region’s indigenous people for shooting a rare albino moose, an animal the Mi’kmaq culture considers sacred.

While albino moose are rare there are no laws against killing them, according to Natural Resources Canada. But the Mi’kmaq say there is an unwritten law against slaying the animal, according to article from International Business Times.

Photos put up on Facebook of the harvest stirred the controversy, and brought outcry. Since the backlash surrounding the white moose’ death, the hunters have apologized and have returned the animal’s hide to the Mi’kmaq community.

“The hunters have shared that they regret, that unknowingly they caused this to happen,” Jim Hnatiuk of Hnatiuk’s Hunting & Fishing posted on the company’s Facebook page. “These are good men and they broke no law, and they have expressed that it would have been nice to have known more about the significance of these white moose.”

We know the significance and we’ve been teaching that to the non-native population for almost 500 years — about the importance that this and other white animals played in our lives,” Paul said. “We are not to harm them in any way, shape, or form because they could be one of our ancestors coming to remind us of something significant that’s going to happen within our communities.

The hunters and the shop owners, now informed of the moose’s significance, are working with Gloade to bring spiritual closure. They are handing over the moose hide to the Mi’kmaq, who will conduct a ceremony to honor the animal.