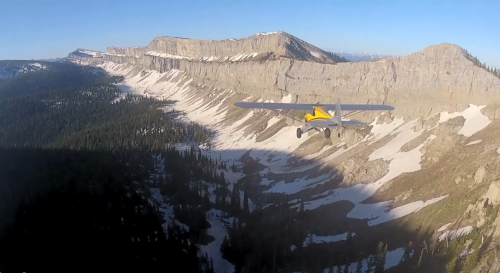 Have any of you been hunting or hiking in the Bob Marshall Wilderness Complex? It is extremely rough terrain, popular with hunters who have pack horses, and few get to see one of the most popular features of the complex; the Chinese Wall. Montana provides many ways to exploring the outdoors, whether it be hunting, fishing, hiking, rafting…well the list goes on. But my favorite is by small aircraft. I wanted to share a view of the Bob Marshall that few get to see; from the air.

This footage is of a Carbon Cub aircraft flying along the Chinese Wall, a 22-mile-long, 1,000-foot-high escarpment in the Bob Marshall Wilderness. This is a place so remote only pilots, packers, and elite  hikers and hunters are lucky enough to see it in person. But if you aren’t one of those with this place on your bucket list, this video is the next best thing:

A huge escarpment called the Chinese Wall, a part of the Divide, highlights the Bob’s vast beauty, with an average height of more than 1,000 feet and a length of 22 miles. The Chinese Wall extends into Scapegoat Wilderness to the south.

In early fall rifle season on and big-game hunting becomes the most popular recreational activity west of the Continental Divide. About 30 percent of the hunters go with one of the fifty-five professional outfitters who operate in the complex. Elk is by far the most popular big-game species.

While most people access this wilderness area by pack horse, there is a backcountry airstrip called Schafer Meadows that provide a short grass strip for small aircraft to land. Schafer is the only historic aircraft landing field within the complex open to the public.

The footage was from Pilot Getaways magazine, for more interesting photos and footage check out pilotgetaways.com.