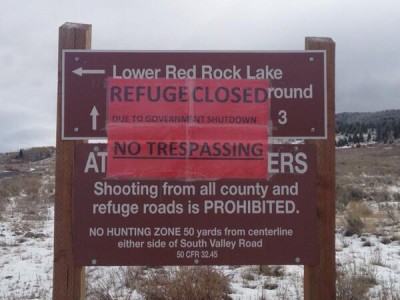 According to a post by Aaron Flint, via the Flint Report:  After federal officials placed “no trespassing” signs up at a wildlife refuge in Southeast Montana, a Dillon hunter was personally blocked from accessing state lands.

Here is a note from the hunter, Don Copple:

Recently, I planned a bow hunt in the Southern reaches of Beaverhead County. I planned out my hike on a trail on public land, to access state lands behind posted private property. This portion of the Red Rocks Refuge is typically open for hunting big game. Shortly after suiting up, with bow in hand, and anticipation of a good hunt, I was confronted by the refuge manager in his private rig, and informed the refuge was closed. I said that I knew the Government was shut down, so expected facilities such as campgrounds, offices and outhouses to be locked. I proceeded to let him know I was just going to walk up the trail to access State lands. He said, you can’t, didn’t you see the sign, the refuge is closed due to the Government shutdown. It’s kind of hard to see a sign while it is still dark, but told him I would look at it. I asked the question, are you serious? He said he was, and told me I couldn’t park in this spot on the County road either, the parking spot is about 500 yards back on the road from the trailhead, but I can’t hike it anyway, because it is closed. Again, I said I just want to get to the State land, he said, I know, it’s hard. Hard isn’t the word, impossible is more like it, as this is the only public access. I understand closing land access due to public safety, or national security, but this is a blatant misuse of government power. To deny access to our public lands is ludicrous, and I think illegal. I don’t blame the Republicans for this land shutdown, or the shutdown of our national monuments. The administrators work for the Presidential Cabinet. Maybe these field managers are following the direction of the particular agency administrator, but they are treating this public land as if it is their privately owned land. My Forefathers did not fight and give up their lives so the king could keep his peasants off his lands. The Government does not own these lands, they have agencies that have jurisdictional management responsibilities. The US Fish and Wildlife Service does not provide safety services in regard to this particular trail, unlike the National Parks. If I injured myself, the Search & Rescue and County Sheriff would have the responsibility to locate me and rescue me.