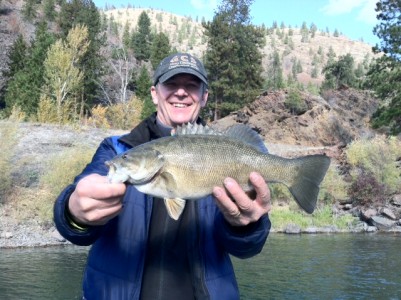 Fall Fishing with the Captain and Bob Snodgrass
By angelamontana

Most folks have hunting on their mind, but the Captain and Bob Snodgrass decided to take advantage of the nice weather Sunday and go fishing. Bob Snodgrass and his bass

They headed to the Lower Flathead River, west of Perma. The fishing started out slow, as they hit the water around 11am. The surface water temperature was only 49 degrees, slightly warmer than the day time temperature.

They finally found some bass after a couple of hours and fishing a few holes. They ended up catch and releasing about 10 bass for the day. They were using a nightcrawlers with a single hook and a bell weight on a three way swivel to keep it on the bottom.

Bob caught the biggest fish that measured 16 inches. He also caught a small northern with a perch colored J-5 rapala.

It was a great day on the water as the nice fall day was very enjoyable, according to the Captain.