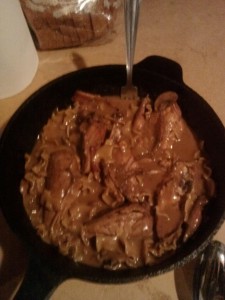 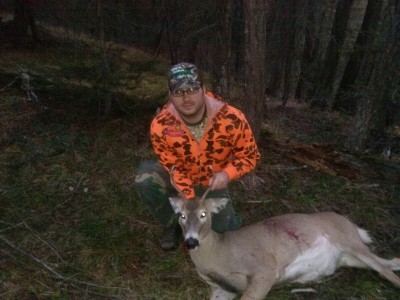 Brad and his opening morning success

A friend of mine, Brad Lehuta, was on a mission to fill his freezer this past Saturday, and he is officially off to a good start, as he shot a buck at first light, but he didn’t stop there.  Now, don’t get me wrong, it could be that he is a good shot with his rifle, but a part of me has to wonder if the awesome Montana Outdoor Radio Show hat he was wearing brought him some good luck, too.

Brad also bagged two Franklin grouse and one ruff grouse with his 45/410 Judge.  Being the curious cat that I am, I asked him how he was planning to prepare the grouse.  His response was not what I had expected, but, nevertheless, it sounded quite tasty.

He said that he was going to fry up the bird meat and add it to some Salisbury Hamburger Helper.  My immediate response was “what?”, but then I thought about it, and wow–what an awesome idea!  I wouldn’t have ever thought to substitute hamburger with any type of bird meat, but Brad did, and he said it ended up tasting pretty darn good.

So, just something to keep in mind if you get some grouse in the future–hamburger helper is not only for hamburger!  Apparently, grouse is a great substitute, at least with the Salisbury flavored Hamburger Helper. 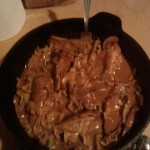 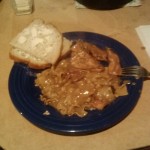