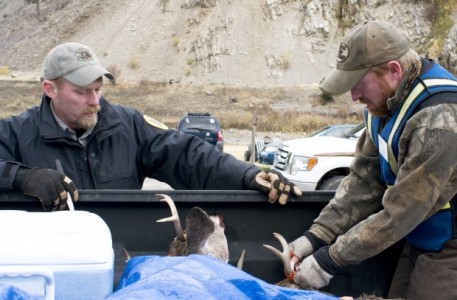 My expectations were high this past weekend during the opening of deer and elk rifle season, but in the end the results I experienced were probably to be expected. The nice weather, not my effort, last weekend helped keep me elk-less as KC Kloppel from Missoula and Jim Swanson from Sheridan Montana joined me for the Montana opener. 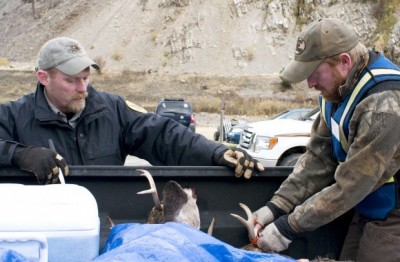 There seemed to be more hunters than animals as the nice weather kept the elk from migrating through the area we hunted. We did experience a nice bull elk get harvested by one of those many hunters. Most of the hunters we spoke with had not seen any fresh sign of elk where they were hunting, a sure sign that the weather needed to change to get the elk moving. I also heard that hunters in the Snowline area by Idaho did not experience the success that they have had in past years.

Paul from the Dell Mercantile’s Wild Game Processing plant took in enough animals to term his weekend as normal, but nothing like he had a couple of years ago during the opener. Monday the Dell and Lima area in Southwest Montana got hit with over 3 inches of snow and that snow was accompanied with colder weather so the hunters that were able to navigate the roads earlier this week will surely have better success.

While the FWP hunting check station in Bonner was one of the slowest on record for hunters on opening weekend that was not the case at H and H Wild Game Processors in Missoula. “We held our own this past weekend but we were still down a little mainly because of the number of deer that our customers brought in”, said John Peterson the owner of H and H. His customers are not asked where they harvest their game but if Peterson had to guess he would probably say the hunting east of Missoula is better. “In my opinion our elk numbers were better than I expected considering the weather”, added Peterson, “but we are having a good Monday and I would expect the rest of the week to be stronger with the change in weather”. Peterson said they took in 42 animals for the weekend with more than half of them elk.

Further east, FWP reported that hunters in Madison and Park counties had a strong harvest opening weekend. The Cameron check station, which is in Madison County, had a very strong elk harvest as the number of elk brought through was double of opening weekend in 2012 and they were the highest numbers seen since 2006. The Alder check station, located in the Tobacco Roots and the upper Ruby, saw 44 elk checked in from 454 hunters. However the check station at Silver City in the Helena area saw slower success rate from hunters.

The FWP check stations in south central Montana saw more hunters than last year but a smaller percentage of them harvested animals. Up in the Rocky Mountain Front north of Great Falls it was also slow with fewer elk, white-tail deer and mule deer harvested compared to the last three years. In Northwest Montana it was a slow opener with the Olney check station showing the best results.

(Written by the Captain; Photo: helenair.com)