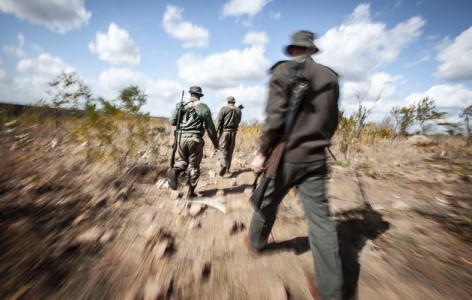 No Forgiveness for Poachers in Tanzania–Shoot on Sight
By angelamontana

“Tanzania has ordered that all poachers arrested within its national parks and game reserves be shot right there in the jungle, and told wildlife rangers to execute the directive immediately.”

That was the first line in an article I just read on africareview.com.  Is something like this something that the US should consider implementing everywhere for all poachers?  As we all know that Montana, sadly, has its share of poaching incidents.

The article went on to state:

“There will be no forgiveness when it comes to cases of poachers terrorizing innocent wildlife like elephants, rhinos and other species in this country,” Tanzania’s Minister for Natural Resources and Tourism Khamis Kagasheki said Friday, adding there would be no need to take them to court.

The minister was speaking at the end of the global Elephant March, which was held in 15 countries worldwide, with Tanzania holding a three-kilometre walk in its northern safari capital of Arusha.

Mr Kagasheki warned all poachers and those involved in illegal hunting to pack up their weapons and find a legal business “as anyone who would be caught in the parks for whatever reasons will be shot dead on the spot.”

Minister Kagasheki, who appeared furious with increasing poaching incidents in the wildlife-rich country, warned that illegal hunters have wealthy international barons backing them thus are well equipped with advanced weaponry and can also usually afford to mount a legal defence.

The head of Tanzania’s wildlife watchdog said human rights issues do not count on the matter and Tanzania would not listen to anyone when it came to implementing the order.

“I am very aware that some alleged human rights activists will make an uproar, claiming that poachers have as much rights to be tried in courts as the next person, but let’s face it, poachers not only kill wildlife but also usually never hesitate to shoot dead any innocent person standing in their way,” Mr Kagasheki said.

“That is why you always hear that court cases against poachers take very long and sometimes the culprits get acquitted, and the only way to solve this problem is to execute the killers on spot,” he said.

“A survey will soon be launched to find out for real how many elephants get killed here annually because available figures range between 30 and 70 jumbos per day.”

The Elephant March was organised by the Tanzania Association of Tour Operators (TATO) together with the David Sheldrick Wildlife Trust (DSWT) through their ‘i-worry’ campaign.

The illegal hunting/killing of animals is a worldwide issue, and that is terribly unfortunate.  If this were something that Montana was going to consider, would you agree or disagree with this extreme poaching punishment?