BILLINGS — The opening weekend of the general big game season saw more hunters in south central Montana than the same two days last year, but a smaller percentage of them harvester animals.

Warm, mild weather made for difficult deer and elk hunting. Many hunters believe that cold, snowy weather this week will be more conducive to hunting.

At the Montana Fish, Wildlife and Parks check station at Laurel, 168 hunters stopped Saturday and Sunday, the first two days of the five-week general season. That is a dozen more people than stopped during the 2012 opening weekend. But only 29.2 percent of hunters took home game, down from 31.4 percent last year.

FWP wildlife research specialist Jay Watson said antlerless animals accounted for most of the white-tailed deer harvest while two-thirds of the mule deer brought through the check station were bucks. No elk were checked and very few hunters were out after waterfowl or upland game birds, he said.

At FWP’s Lavina check station, 464 hunters stopped, up steeply from 396 in 2012 and the most for a first weekend since opening day was moved from Sunday to Saturday in 2010.

The bright spot at the Lavina check station this past weekend was the elk harvest. The 22 elk checked were the most for opening weekend since recordkeeping started in 1993 and double the long-term average of 11 elk.

At Columbus, 257 hunters stopped – 93 more than last year and the most for an opening weekend since the first day moved from Sunday to Saturday in 2010. The percentage of hunters who took home game was the lowest on record, however, with only 27 percent harvesting an animal. Last year, 44 percent of opening-weekend hunters had animals while the long-term average is 40 percent.

FWP wildlife biologist Shawn Stewart said hunters checked 23 mule deer – one fewer than last year and less than half of the long-term opening-weekend average of 48. Elk were the bright spot with 17 checked at Columbus. That is the most on record for an opening weekend and well ahead of the average of four elk. For the first time on record, Stewart said, the number of elk checked on the first day of the season exceeded the number of legally harvested mule deer.

Very few white-tailed deer hunters reported seeing the remains of deer that died over the summer, indicating that the recent outbreak of EHD had a minimal affect on the Stillwater and Rosebud valleys. EHD is a naturally occurring disease that killed numerous white-tailed deer in the Clarks Fork and Yellowstone River valleys this fall.

At Big Timber, the percentage of hunters with game was the lowest on record – just 24 percent, compared to 38 percent during the 2012 opening weekend. While the harvest of all big-game species was down from last year, the number of mule deer and antelope was down dramatically.

FWP wildlife biologist Justin Paugh said hunters reported particularly few white-tailed deer north of Big Timber, where EHD was reported this summer and fall. The full impact of the disease in that area will not be known until next spring’s surveys are complete, however, he said. 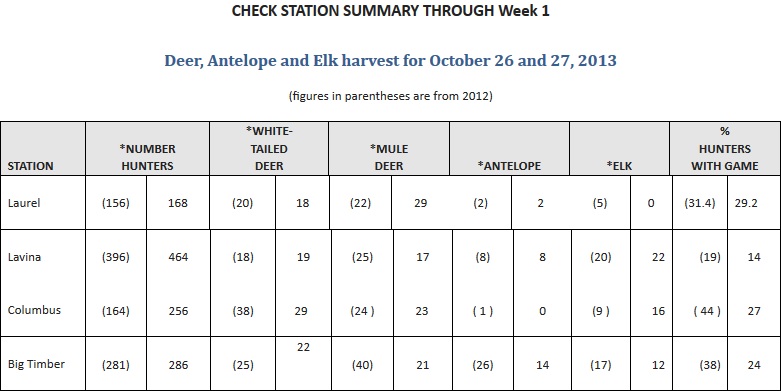