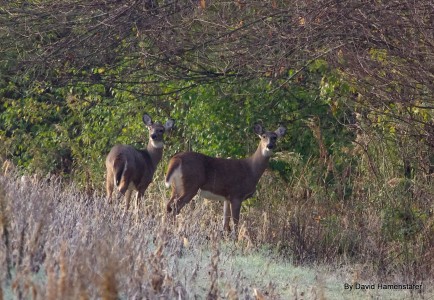 Nearly 400 dead deer have been reported since the September outbreak began, and FWP sent in samples from several dozen deer for testing.

Most deer deaths were concentrated in the Clark Fork River Valley west of Missoula from Harper’s Bridge to approximately 10 miles downstream and in the Mill Creek area northeast of Frenchtown.

Vickie Edwards, FWP wildlife biologist in Missoula, said that FWP also received reports of several dead whitetails in outlying areas. Samples from these dead deer were also sent to the lab for testing, but results are not yet in.

“The test results we got back this week are from the earliest samples we collected in the core area of the outbreak west of Missoula,” said Edwards. “We’re still waiting on lab results from other deer in outlying areas to confirm that all deaths are a result of EHD.”

EHD is a naturally occurring virus spread by tiny biting midges—it is not spread from deer to deer. The virus causes hemorrhaging that can kill the infected animal within a day or two after approximately a six day incubation period from the time of being bitten. Dead animals frequently are found near water, where they go to alleviate a high fever caused by the disease.

The biting midges, also called sand gnats or “no-see-ums,” reproduce in wet soil or mud. Their numbers peak from mid-August through October, but a hard freeze will kill the midges and stop the spread of the disease. It is too soon to tell if the recent, colder temperatures resulted in a midge die-off. Because of the incubation period, it might be possible to continue to see dead and dying white-tailed deer within two weeks of a hard freeze.

Other parts of Montana reported outbreaks of EHD this late summer, but this is the first time the disease has been confirmed west of the continental divide in Montana. Humans are not at risk of contracting the disease by handling or eating infected deer.

“Hemorrhagic disease viruses are not contagious from one animal to another and are not transmissible to humans,” said Jennifer Ramsey, FWP Wildlife Veterinarian in Bozeman.