A lot of us have seen the photo of Theodore Roosevelt, an avid hunter, on a moose, and some of the stories that go with the photo.  One of the stories I read with this famous picture included information about the former President being so in tune with wildlife that he was one of very few people in the world that could pull off such an activity.  Another caption I have seen with the famous photo was talking about how Mr. Roosevelt used moose instead of horses as pack animals while hunting…which seemed a bit ironic to me.  I just hope he wasn’t supposedly hunting moose while riding a moose…

The photo was recently proven to be a fake via an article by Heather Cole, Assistant Curator of Modern Books & Manuscripts and Curator of the Theodore Roosevelt Collection, on the Houghton Library Blog.  Here is the post: 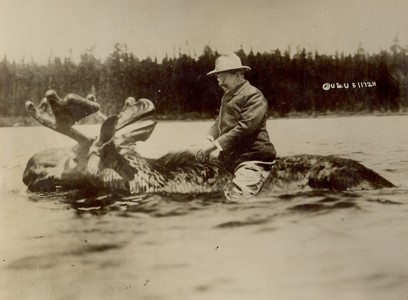 Many of Theodore Roosevelt’s adventures seem like something out of a tall tale: he survived an assassination attempt; nearly died while exploring the Amazonian jungle; and became the first president to drive a car and fly in a plane; among many others. Despite having been a larger-than-life figure, this is one thing that TR never did:

In 1912, TR was campaigning as a promising third party presidential candidate for the newly created Progressive (or Bull Moose) Party. Political cartoons frequently used a moose to illustrate the party’s struggles and flaws, but perhaps none so creatively as a collage by the photography firm Underwood and Underwood, titled “The Race for the White House” (apologies for the poor quality of the image; an original copy of the newspaper could not be found):

Underwood’s humorous triptych, published in the New York Tribune on September 8, 1912, features three of the four presidential candidates (only Eugene Debs is missing): incumbent William Howard Taft astride an elephant, TR in the center riding a moose, and Woodrow Wilson riding a donkey.

Underwood appears to have cut out an existing photograph of TR riding a horse, and carefully pasted it onto an image of a swimming moose. Under closer examination, one can see that the focus and shadows on TR do not match the moose. Also visible is the white line scratched or painted on the photo to approximate a ripple made by TR’s leg in the water.

So while it would be nice to think that TR charmed a moose into giving him a ride, unfortunately that was one feat he never managed. 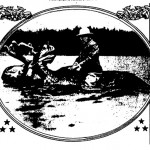 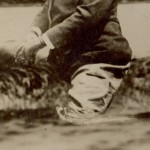