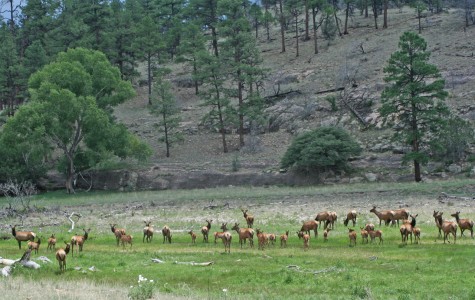 New Mexico Department of Game and Fish just released the following report, stating that toxic algae was the cause of the 100 elk deaths in New Mexico back in August:

SANTA FE – The Department of Game and Fish has concluded that a toxic algae bloom caused the deaths of more than 100 elk discovered Aug. 27 in northeastern New Mexico.

Department biologists collected tissue samples from the dead elk and water samples from privately-owned land north of Las Vegas, N.M. The Department sent the samples to laboratories across the country. A lab found Anabaena, a form of naturally occurring blue-green algae that produces the deadly neurotoxin, anatoxin-a, in a water sample. This potent neurotoxin can cause illness and death within four to 12 hours if ingested.

“Based on circumstantial evidence,” said Kerry Mower, the Department’s wildlife disease specialist, “the most logical explanation for the elk deaths is that on their way back to the forest after feeding in the grassland, the elk drank water from a trough containing toxins created by blue-green algae or cyanobacteria.”

Department biologists found the dead elk in a one-half mile by three-fourths mile area, and suspect that they died within the same 24-hour period. The elk showed signs of having struggled on the ground, symptoms consistent with poisoning from a neurotoxin.

Although some types of microscopic blue-green algae produce toxins, they seldom cause serious problems. During warm weather the algae can reproduce quickly in standing water, creating a bloom that releases deadly neurotoxins into the water. The conditions resulting in the elk mortality existed only a short period of time. Algae blooms occasionally kill livestock and pets, and can sometimes be harmful to humans.

The Department investigated a wide variety of possible causes for the elk deaths in addition to the blue-green algae, including: anthrax, epizootic hemorrhagic disease, botulism, lighting strike, poaching, poisonous plants, malicious poisoning, toxic levels of sulfate and nitrate, and the possibility of an industrial or agricultural accident. The Department ruled out these causes of death.

No one has reported dead livestock or wildlife in the area since August. Hunters should not harvest animals that exhibit unusual behavior or appear sick, and should report anything unusual to the Department’s toll-free information line, (888) 248-6866.