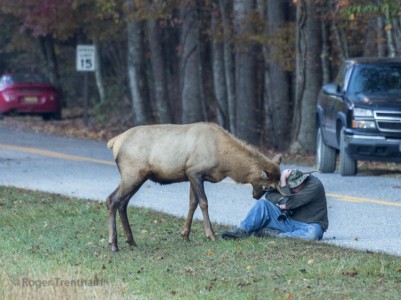 Elk Spars with Photographer
By angelamontana

Here is an interesting post and series of photos I found on gosmokies.knoxnews.com that were taken in North Carolina last month.  Have you ever seen anything like this in areas out west where the elk are used to people, such as Yellowstone National Park?

I saw a very unusual sight in Cataloochee Sunday morning. There were about twenty people lined up along the road watching and photographing a bull elk and his harem of about ten cows and three calves. Everyone was being very quiet and truly enjoying the sights and sounds of a beautiful Fall day in the Smokies.

Movement caught my attention to my right and there sitting on the pavement about seventy-five yards up the road from me was a spike elk sparring with a photographer. The spike had apparently come out of the woods behind the man and wanted to do a little sparring. I turned my camera and began recording the session.

The man lowered his head to avoid eye contact and covered his face with his arms while the spike placed the crown of his head between his antlers against the man’s head and began turning back and forth. The man protected himself as best he could with his arms while clutching his camera and this went on for several minutes.

Unfortunately, the man left his backpack and camera lens on the ground. For some reason the spike approached the backpack then took the strap in his teeth and began to pick up the backpack. The car driver moved forward again and the man opened his car door and the spike dropped the pack and the man was able to retrieve it.

The spike was not finished with his mischief. He approached a parked car across the road and upon seeing his reflection began making motions like he would attack the car. He slowly placed his head against the car and rubbed up and down the side of the car before raising his head in victory and then rejoined the herd in the field. For all the drama, I don’t think the man or the car were hurt but it certainly makes you wonder what you would do when confronted at close range by an amorous three hundred pound animal. 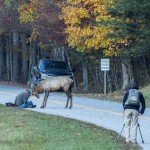 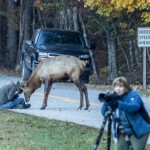 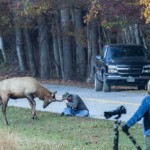 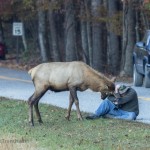 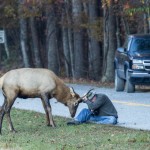 (Information and photos via gosmokies.knoxnews.com)