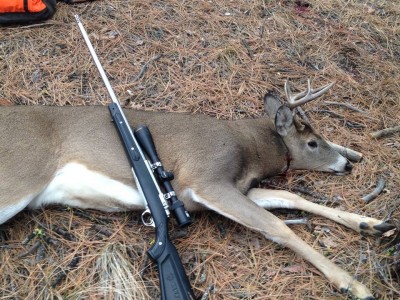 Got a Buck? Jeff Hobirk of Missoula Has One!
By angelamontana

Jeff Hobirk, of Missoula, is no stranger to hunting and has been successful many times at filling the family’s freezer over the years, and this year was no exception. He is an avid elk and deer hunter and even has his own “Hunting Headquarters” behind his house.

According to Mills, his wife, Jeff has been out hunting quite a bit since the beginning of the season, and he was even jokingly considering being a guide, as has been quite successful at spotting elk, but he hasn’t been in a position to get a shot at one.  Having both a deer and an elk tag, Jeff decided to try his hand at deer hunting again.  Coming home with nothing can get to some people, but not Jeff–he was on a mission.  And, yesterday, his mission was accomplished.

After meeting up a few days ago with a hunting buddy in the Bitterroot valley, who was also looking to get himself some wild game, the two hunted and hunted.  After Jeff’s buddy was successful, Jeff was determined to get something.  He and his buddy kept hunting, scouring public land high and low, and it’s a good thing they did.  Jeff got a nice whitetail yesterday morning that should make for some really good eating!

Congratulations, Jeff, and we hope to see a picture of your elk when you get it, too!