At the midway mark in hunting season in west-central Montana, hunter check station totals show that elk and deer harvest are on par with last season.

So far hunters have checked 527 animals, compared to 529 at this point in the 2012 season. Check station tallies show 266 elk harvested, up from 248 last year at this point. The majority of the elk harvest was reported at the Montana Fish, Wildlife & Parks (FWP) hunter check station near Darby, where totals are just above the five-year average and 18 percent ahead of last season.

Mule deer harvest, although on par with recent years, is relatively low compared to long-term average. According to FWP Region 2 Wildlife Manager, Mike Thompson, mule deer populations on public lands in western Montana, and many places across the Rocky Mountain West, are generally at low levels and hunting regulations are restrictive.

Approximately seven percent of hunters that travelled through one of the region’s hunter check stations during the first week of the season harvested game. Check stations tallied 7,712 hunters and a harvest of 266 elk, 74 mule deer, 183 white-tailed deer, two black bears, one bighorn sheep and one wolf.

Hunters are reminded that they must stop at all check stations that they pass on their way to or from hunting—even if they have not harvested any animals. The general rifle season for deer and elk runs through Sunday, Dec. 1 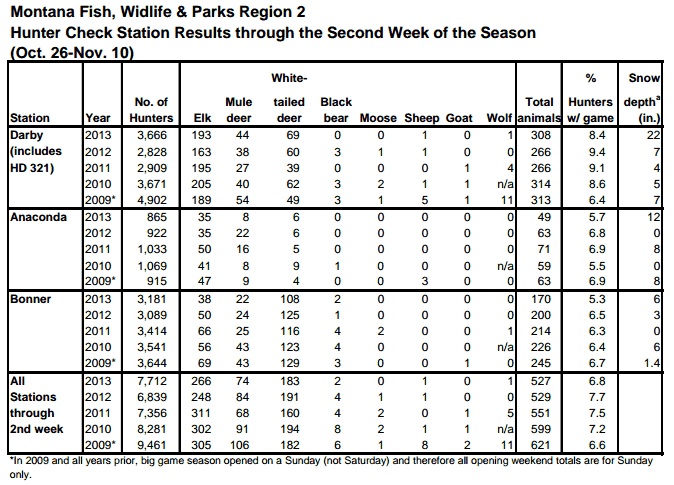