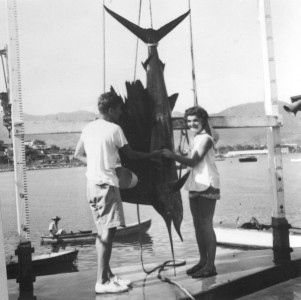 In Memory of Kennedy, Here is his Fish Chowder Recipe
By OutdoorAly

Today our nation is remembering former president John F. Kennedy on the 50th anniversary of his tragic assassination. For people of this generation time stood still in the moments after hearing of his death, and they most likely remember exactly where they were when that happened. That got me thinking; what was my mom up to fifty years ago on this day?

My mom was a junior at Sentinel High School in Missoula, Montana. She and classmates had just started a home economics class and were looking forward to a relaxed curriculum to break up the school day. The buzz of teen gossip and the clatter of cooking utensils was brought to a sudden silence when the teacher announced that the president had just been shot.

Then the teacher brought in a radio and the class gathered around for updates on the tragedy. Students were crying, and they all just sat and listened in devastation.

“We were all thinking, what’s going to happen now?” she said. “The unknown was frightening.”

“There were so many unanswered questions, and it felt like it was two to three days of waiting for the full story to come out. Back then we had to depend on Walter Cronkite and the six o’clock news for information. There was no CNN, or Twitter with minute to minute updates.”

My mom went on to explain that fifty years ago when she was growing up, the country had a very real fear of nuclear warfare. The Cuban Missile Crisis was only a year prior to the assassination of President Kennedy, and it had the entire country on edge. Her neighbor’s dad, who was a part of the Civil defense, even built a bomb shelter in his back yard.

Bomb drills in schools were more common than fire drills, so one day when an evacuation alarm went off everyone feared the worst. They all filed outside and wondered if the stand-off between Washington and Moscow over the Soviet deployment of nuclear weapons in Cuba was indeed ending in Armageddon. Turns out it was a false alarm. But tension in the nation was building.

Just over a year later in Dallas, November 22, 1963, the United States was left in a very vulnerable state when they lost their leader, President Kennedy.

In memory of JFK, I dug up one of his recipe’s the National Archives shared for New England Fish Chowder. It uses Haddock, but us Montanan’s can substitute local Burbot or ling fish, another member of the cod family, and a great catch during ice-fishing season!

Simmer haddock (or ling) in 2 cups of water for 15 minutes, drain and reserve broth.

Saute diced pork until crisp, remove and set aside.

Pour in fish broth plus enough boiling water to make 3 cups of liquid.

Add milk and butter and simmer for 5 minutes.

feature photo is of John and Jackie with a sailfish they caught on their honeymoon copyright: John F. Kennedy Library Foundation