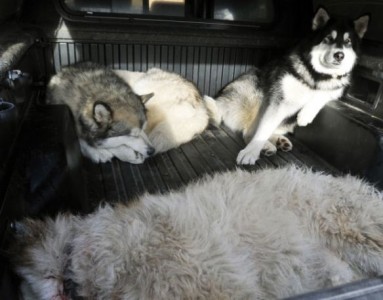 I was just informed of a site that claims to have “the real story” behind the dog shooting at Lolo Pass, in Layne Spence’s own words via Facebook (posted by exposingthebiggame.wordpress.com):

“What is on my mind is the tragedy that has taken place and the miss quotes from the media and the Sheriffs dept. So I am setting the record straight. This is what happened….

I went crosscountry skiing up at Lee Creek campground where I have gone in the past. Knowing it was hunting season I put the bright lights that are on all three of my dogs collars.

I look up and there is the “hunter” and I screamed “what have you done?” Screaming hysterically, the man says ” I thought it was a wolf.”

I said “You just killed my dog, you killed one of my kids.”

I started screaming “noooooo.” He started to say something like “can I do something,” not I am sorry.

I said “Do you know what a wolf looks like? You killed my dog.”

The man took off, I just screamed “noooooooo” and tried to put him back together but his leg was torn off and yes 15 yards in front of me and yes he was shot with an ASSAULT rifle, I know I have seen them it was either an AR 15 or AR 14. It was all black had a sound supressor and that was why no big BOOM BOOM semi automatic.

I know guns, I don’t have any but I have shot them before, and yes I have hunted both Bow and Rifle. It is the irresponsible hunters who think they can shoot any animal they see if they are in the woods.

The MT Fish and Wildlife said they couldn’t press any charges because it wasn’t a game animal on the road, it was a domestic animal. What???? Bullshit, So I left my skiis and poles there, put my Little Dave’s bloody and broken body on my shoulder and hiked out to also get my other dogs to safety.

So no charges, I call the police dept who gives me examples of people getting hurt because of the public outcry and are afraid of vigilante violence. But the truth is still one of our rights and so is freedom of speech. I don’t want this guy to get hurt , but something needs to be done…I am heart truly heart broken, everything I do is for my dogs, from where I live, to what I drive, and what I do is predicated on the lives of my dogs…Thank you to everyone who has wished myself and my other dogs Frank and Rex well…Layne”