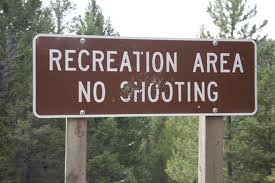 Yesterday, I saw two guys standing next to a truck, one of them with a rifle in his hands, as I drove through the Lake Como recreation area and campground.  One of the guys was pointing up the hill, seemingly guiding the other one, and as I rounded the corner, I lost sight of the guy with the rifle, that was, the last I saw, leaning over the hood of the truck looking at something through the scope that the other guy was pointing at.  Being that this was a recreation area, and it was broad daylight, I assumed the one guy didn’t have binoculars, and they were just looking at something at the top of the hill.

There are signs posted that read “No shooting”, so I was wondering what the two guys were doing–especially leaning over a truck from across the road, aiming the rifle up the hill.  I stopped my Jeep, and waited for Jason, who was driving in front of me, to stop his truck to see if he saw them, and then there was a gun shot.

I ended up parking my Jeep, and I got in the truck with Jason, and we drove back to the group, where nobody was wearing orange, and they had already headed up the hill after whatever they were shooting at–and now there were three people.  Apparently, there was a girl with them, too.  We waited around for them to come down for a few minutes, and then there was another gun shot from on top of the hill.

While they out there, two of the three decided to put on orange vests.  There were “No shooting” signs posted that you couldn’t miss, so we decided to head down the road to where we could get service and give FWP a heads up that these people were so blatantly hunting or shooting in a recreation area, without orange and across the road.

We notified FWP and headed back toward my Jeep.  As we were driving by, a teenage kid was cleaning off his bloody knife, with a smile on his face, after gutting a young doe the crew had dragged down the hill.  There was an older man, maybe 60 years-old, who was beaming.  I recognized him as the man with the rifle that was being guided by the teenager.

We reminded them that the recreation area is a no-hunting area, and the older man’s smile instantly disappeared and he seemed genuinely surprised and responded with “oh no, really?”, while the teenage male immediately responded with “it’s a no SHOOTING area–you can hunt here”.  Um.  What?  That almost made me laugh out loud, as he must have also forgotten how they got the deer that was on the ground at their feet.  You aren’t even supposed to fire a gun in the recreation area.

We drove back to my Jeep and decided to skip the long drive home via Lost Horse and headed toward the highway.  By the time we drove back by the truck, the deer was loaded up and everybody was in the truck.  They flew out of the area pretty quickly at that point.  Their license plate was also taken by two other people that had encountered the trio.

The moral of the story here is to read signs and READ THE REGULATIONS of the area you are hunting–do NOT rely on other people to tell you what the regs are.  If the group would have been literally 150 yards up the road where the recreation area boundary was, they could have legally hunted that deer, as long as they had their hunter orange on and they were not shooting from the road.  Don’t rely on other people to tell you the regulations if you are the one hunting.  Because the area is considered to be in a campground area, the offense is even more serious.

From what I gathered, the older gentleman, who was apparently a new hunter, was being guided by the teenager that had inaccurate information.  It is always a good idea to keep a copy of the regs, for all of the animals you are hunting, in your vehicle and/or hunting pack.  Don’t rely on other people–read the regs yourself.