Hunting is an excitable sport. Some of us admittingly get more excited than others, but all hunters have some level of adrenaline pumping in their veins when the “hunt is on”.

Angela Strohmer, from Missoula, most definitely would be on the higher end of the scale. Last week, she set out to bag her first muley buck. “I had been obsessed with mule deer for so long, for so many reasons”, said Strohmer. She is no stranger to deer hunting, as she bagged a nice whitetail buck last year toward the end of the season. On that whitetail hunt, she was joined by Aarron Watrous, of Darby, who helped her in locating the buck.   Angela took care of the rest with a one shot.

This year, she again solicited the help of Watrous, and they were joined by his brother, Matt, who was back for his first hunting season after serving 5 years in the Marines. “I was so glad that Aaron and Matt were along, my only disappointment was my boyfriend Jason Maxwell couldn’t be there because he had to work.”, she said.

So, with her .280 rifle in hand, the three set off to find a muley that Angela would be proud of. It wasn’t long into the day when Matt spotted a nice muley buck. “He’s right there…do you see him?” Angela, who forgot her binoculars, was having a hard time locating the buck through her rifle scope. “Do you see him? He’s rubbing his antlers behind that tree,” said Aaron.“He’s broadside–you have your shot,” said Matt.

Angela finally caught movement through her scope, and as she put the cross hairs on the buck, she started to shake. “I get so excited, that I shake uncontrollably…apparently, it doesn’t happen for everybody, but it is a rush like no other, and it’s kind of annoying when I’m trying to steady my scope, and I literally have no control over the movement I’m making. But, I watched him for another good five minutes while he wandered behind trees with his nose down, following does along the steep terrain.”

Finally, the deer stopped broadside, and she managed to steady her rifle long enough to aim and take a shot. “I was shaking so badly, but I hit him” added Angela,. “This was definitely one of the best hunts I have had, and I am stoked to fill up the freezer. I will be doing a head mount on this guy.”

The excitement of this hunting trip wasn’t over quite yet.  In fact, it was a moment that Angela was looking forward to after they loaded the deer in back of the pickup and headed for home! “Oh, and one of my favorite parts was actually going through the “WITH GAME” side of the hunting check station just outside of Darby”.

You may view all the pictures of Angela’s memorable day below. 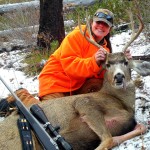 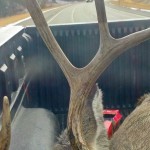 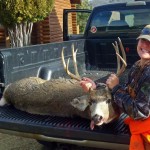 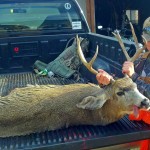 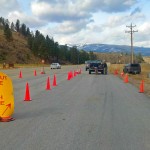