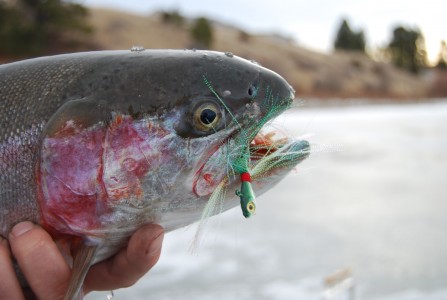 Does it get any better than spending your birthday standing over an ice hole with jigging rod in hand anticipating that “thunk”?!?! While spending my birthday doing exactly this, I thought to myself, “is there anywhere else I would rather be…NOPE!” While getting lost in the thought of feeling very blessed to be able to spend my 32 years young in God’s playground…I was violently interrupted!! As I lifted my rod “POW” I got drilled so hard it happened…what we call in the world of fishing “I got taken to the cleaners.” My birthday Micro Glass Minnow in the ‘Supercraw’ flavor just got destroyed by a giant landlocked Tuna Trout! Shaking a little from the rush…my friend Breck was laughing at the look on my face! Guess that’s what I get for always tempting fate with my light monofilament line. If you know me I’m always using the lightest line possible and sometimes too light for the application…more finesse and it adds a little spice to the battle right;)

With the velocity that I got bit, it reminded me of the thrill of shooting my 375 ultra-mag…so I reached in my pocket and brought out the birthday big guns!! I figure now is as good a time as any to release the first photo of the new “EMERALD SHINER” Glass Minnow for 2014!! This is the most realistic minnow representation I have ever seen and we did some serious tank testing before final approval. If you fish a body of water where minnows are a forage base than this is the jig for you. With this in mind, I know big trout forage on their own kind so down the whole the ‘Emerald Shiner’ went. Not jigging for a couple minutes Breck yelled, Trev…big fish!! I set my rod down and ran over to help him out…within’ a couple minutes of doing battle we had a beautiful rainbow trout glistening in the sun! We did a quick photo shoot before we set her back in the hole to fight another day. After a few high fives and laughs, I meandered back over to my set. 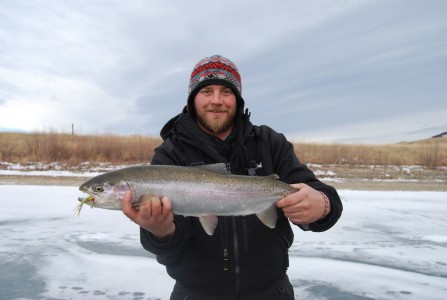 About half way to my hole I heard a loud racket and instantly scanned the set of dead rods… but to my surprise they were all in standard position. Then before my very eyes was my custom rod was about to be inhaled down the ice hole with my ‘Emerald Shiner.’ A giant trout had smashed my ‘Emerald Shiner’ Glass Minnow just sitting there in the water (the material is so subtle on these jigs that even when paused, it looks like natural fin flare on a frightened baitfish causing violent strikes.) Running and doing a Chuck Norris dive I caught my rod by the very end of the handle. Man did I get lucky…NOW THE BIRTHDAY BATTLE WAS ON!!

After finally reaching my arm down the hole to wrestle my birthday trout onto the ice I noticed a big surprise!! There in his very jaw was my ‘Supercraw’ Micro Glass Minnow and the new ‘Emerald Shiner’ Glass Minnow!! What a ferocious beast…I guess he decided the freshwater shrimp imitation was only an appetizer and the ‘Emerald Shiner’ was the main course!! After we got a couple photos we slid her back down the hole to eat something else! Even though I jigged for a couple more hours, I was on fish cloud nine from my birthday trout. What an awesome way to spend your birthday! 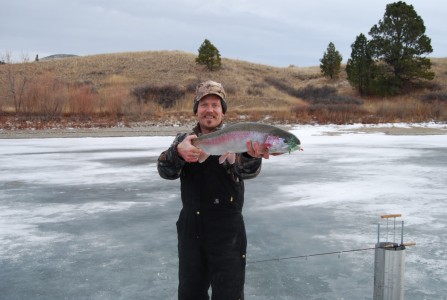