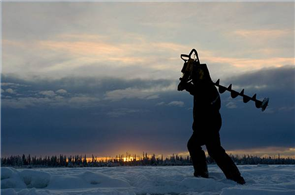 Ladies and gentlemen, start your ice augers! The record sub zero temperatures, that held much of Montana in its frigid grip, made some great ice for ice anglers, that is for sure. The temperatures were so cold that they actually kept most of the ice fisherman off the ice until just a couple of days ago. So, the fishing reports are slowly coming in. Rest assured, that first ice of the year usually means that the fishing is good.

Ten days ago, western Montana had temperatures in the upper 40’s, open water everywhere and no snow on the valley floor. That has all changed now with plenty of ice and a nice covering of snow. “I always try to get up to Georgetown Lake and fish first ice on and this year the fishing was great as Tracy and I were able to catch some nice trout through the ice”, said Brandt Hamernick of Missoula. It has been a few years since we have had this much ice this early in the season. “Fishing this time of the year on Browns Lake through the ice normally is pretty good”, reports Jim Johnson from Lincoln. Johnson recommends that if you are going to fish Browns Lake that you try your luck before the January 1st.

Dick Zimmer, from Pablo, had this early ice fishing report, “On Crow. I caught perch and Brown trout on a late evening one hour foray there. East Bay on Flathead Lake in the shallows had lots of small perch and my partner Brandon Dunkerson saw a lake trout. Turtle Lake is very low which has concentrated the perch, bass and an occasional trout to be caught.

Both, Crow and McWenneger Slough, have multi-possibilities. They each have largemouth bass, perch and pike. The differences in McWenneger Slough are sunfish and black crappie. Crow has a variety of trout, browns and rainbow being predominate”. For more detailed information give us a call at 406-675-0068 or email us at: macman@ronan.net

Over in Eastern Montana, the huge body of water, Fort Peck Reservoir, has the possibility of freezing over this year. That is not normally the case with the 134 mile reservoir according to John Daggett from US Army Corp of Engineers, “We have not frozen over yet but I think it is safe to say the lake is going to freeze over earlier than it has for a while. Checking our records the earliest the lake has frozen over was December 10, 1983, we didn’t break the record last Monday because we had a big wind and the lake did not freeze over”. The next earliest date is December 13, 1985 according to Daggett. I think the lake is close to freezing but we are going to have to have calm winds and lows close to or below zero for it to do it”. On Tuesday the temperature was +13 degrees with a north wind and Daggett said it felt like a heat wave.