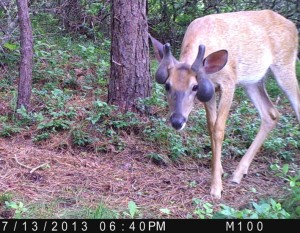 Trail cameras pick up some interesting snapshots of wildlife.  Sometimes, the wildlife captured will make you do a double take…such as the buck pictured below.

This particular buck was photographed back east in Nantucket this past summer and forwarded to bigdeerblog.com.  From there, the site moderator showed the photos to QDMA biologist, Kip Adams, so he could have a look at them, and he had this explanation:

“Hey Mike, those are the biggest drop tines I’ve ever seen on a spike! I know his right antler split but I couldn’t resist referencing a spike with drop tines!

It looks like he injured both his main beams early in the growing season. I’ve seen numerous bucks with a similar injury to one side of his rack, but never to both sides that occurred so low on the antlers. Many times the pooling of blood in the downturned antlers causes them to break and fall off but this guy was lucky to keep them. He’ll have the most unique set of antlers around his area this year, and since the injuries appear to be above the pedicles, he should have a normal set of antlers next year if he survives the hunting season.

Apparently, the big “blobs” on the beam tips are pooled blood. “Blood will pool in low areas where the circulatory system isn’t removing it as fast as it enters,” adds Dr. Grant Woods. “That’s a unique buck!”

How about them apples?  er…blood blobs, rather… 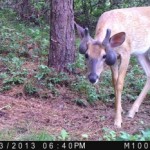 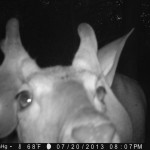