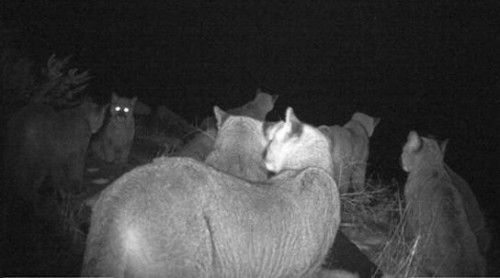 FWP derived the southern Bitterroot’s initial lion population estimate in 2012 by applying radio telemetry information obtained in previous research projects in other parts of the state.

But newly refined DNA-based techniques for lions gave scientists another tool to use in the Bitterroot. Researchers collected lion DNA last winter, and results document a population two to four times higher than first estimated.

“Traditional approaches to estimate mountain lion abundance focused on radio collaring and counting individual lions, but recent advancements in lion DNA sampling and spatial estimation methodologies made it possible to get a more accurate estimate of lions in the Bitterroot,” said FWP’s Dr. Kelly Proffitt. “These new techniques reduced time, cost and the number of lions that had to be handled and made it practical for us to obtain an improved lion population estimate specific to the Bitterroot.”

From December 2012 through April 2013, FWP’s Proffitt and UM’s Dr. Mark Hebblewhite directed the collection of DNA samples from live and hunter-harvested mountain lions in portions of the East and West Forks of the Bitterroot. The field team, led by FWP’s Ben Jimenez, prioritized collecting DNA samples in gridded portions of the study area based on habitat type and quality. DNA samples were then analyzed by the United States Forest Service Rocky Mountain Research Station in Missoula.

Since then, the research team has been immersed in a cutting edge statistical analysis of the data. Proffitt reports that the results are now complete and the work will be peer-reviewed this year and published in a scientific journal.

From the 80 samples included in the analysis, researchers were able to identify 62 unique lions by their genetic signatures. The DNA-verified sample of 62 independent individuals is higher than the initially estimated population for the area and represents the lowest possible number of lions in the southern Bitterroot.

Using 62 confirmed lions as a starting point to estimate the population, researchers combined information on habitat quality, search effort, and encounter likelihood in a spatial capture recapture (SCR) model to estimate the southern Bitterroot lion population. Results from this model predict 85 lions in the West Fork of the Bitterroot and 82 in the East Fork—lions that are independent adults, excluding juveniles and kittens.

“Our field team had a very high encounter rate compared to other mountain lion studies and our recapture rate was low,” Proffitt added. “We kept capturing new individuals throughout the entire four months of study, which also indicates a high density of lions.”

Results not only show a population higher than expected but also one that is at the higher end of lion densities compared to other lion populations that have been studied across the West. Proffitt points to several factors that likely contributed to higher than average mountain lion abundance in the area.

“The combination of low to no female lion harvest during the past 10 years, combined with good quality lion habitat and diverse prey likely result in a high density mountain lion population,” Proffitt said.

Beyond the Bitterroot, Proffitt’s and Hebblewhite’s work represents an advancement in the science of estimating mountain lion populations throughout their range. The pairing of DNA sampling techniques with habitat quality modeling is something new, Proffitt said.

“These SCR models have become the gold standard for counting tigers across their range,” Hebblewhite said. “They were developed in part specifically to count tigers, and so, their application to mountain lions is a natural extension. Through my involvement in similar projects estimating tiger and leopard numbers in Bhutan and Russia we have learned much about these methods.”

And in the Bitterroot, the results have the potential for broad application. The Bitterroot lion research was prompted, Hebblewhite explained, by an ongoing joint UM and FWP study in the East and West Forks of the Bitterroot aimed at uncovering the leading causes of elk calf mortality.

“When mountain lions started turning up as a major cause of elk calf mortality in their first year of life, we wanted to establish a baseline for the lion population in the Valley,” Hebblewhite said. “We now want to evaluate the extent to which lion abundance is controlled by hunting season quotas and how potential changes in lion numbers might affect elk calf survival.”

“We are fortunate to have this research on mountain lions in the Bitterroot,” said FWP Wildlife Management Chief, George Pauley. “It gives us reliable information to work with as we develop lion harvest quotas to reach the population objectives that we are after.”

FWP Region 2 Wildlife Manager, Mike Thompson, said that FWP established a goal and associated harvest quotas last year to reduce the Valley’s lion population by 30 percent over the course of three years to balance lion numbers with prey and human tolerance. The harvest quotas to achieve this reduction were based on the initial (2012) population estimate.

“With this new information we will need to re-evaluate our lion harvest quotas for next season before FWP makes its proposals to the Fish & Wildlife Commission in April,” Thompson said. “We’ll be tracking lion harvest as we go and will have the chance to adjust quotas up or down as needed.”

To find out more, view the Bitterroot lion project report online at fwp.mt.gov. Follow links to “Fish & Wildlife” and “Species Conservation and Management” or contact FWP at 406-542-5500.