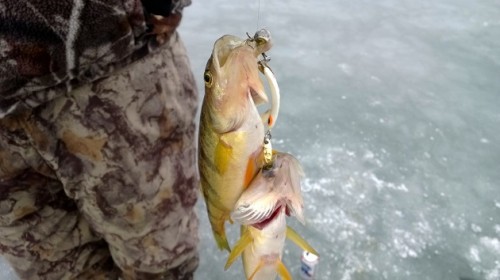 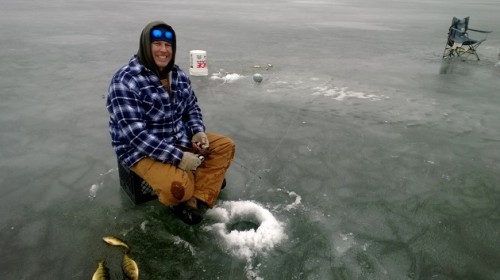 I recently took the Macman’s advice and filled my truck with a bunch of stinky fisherman, for a trip to Pablo reservoir. The reservoir has recently opened up for fishing and as the Macman says is “hottest perch fishery in western Montana.” He is not lying, it was a day filled with excitement and fun. 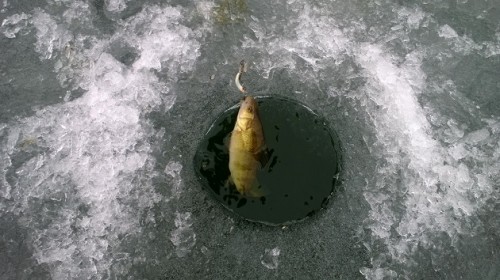 As always, we made our first stop at Zimmer Tackle, to pick up the latest in the Macman’s creations. This time it was a 1/4 oz double treble trilobite. The weather in western Montana was gorgeous on Saturday, except for on the lake. An inversion had caused the lake to be covered by a think fog. But that didn’t stop us at all. After finding the proper depth (12-15 ft) we poked some holes and within seconds, landed our first perch. The action did not slow down for the rest of the day, as we filled a 5 gallon bucket with fresh perch.

The trilobite lure proved it’s worth by bringing in a “twofer.”

The fishing is still red hot on Pablo reservoir, read the latest report from the Macman at Zimmer Tackle

Fishermen:
Finally Pablo Reservoir is open and as of yesterday. I would to tag it as
the hottest perch fishery in Western Montana judging from all the reports
I’ve received.
There were reports of guys taking home as many as 100. Steve Speckert of
Polson said he landed the biggest perch he’s caught in 30 years. The size
spectrum is from tiny to jumbo with steady action being the norm.
I had the best success yesterday with a ¼ oz all –glow Double Treble
Trilobite which is a Trilobite with hooks and willow leaf blades on both
ends. I’m amazed at how aggressively they attack this jig. The size
helps attract the bigger fish and is somewhat of a deterrent to catching
so many small fish. Tube jigs also work well.
After initially catching a fish on maggots I switch to fish eyes. There
is something about the appearance and the smell of the fluids in an eye
that drive the fish crazy.
Perch fishing is a great way to initiate young anglers. Being on the ice
frees them from the confines of a boat and the chance of having a positive
outdoor adventure is much increased. I’ve never known anyone who’s
developed a passion for outdoor sports that has any regrets.
For more information give us a call at: 406-675-0068 or email us at:
macman@ronan.net
Good Fishing,
The Macman