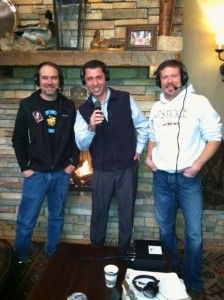 “Show Season…Already?!?!” by Trevor Johnson of Kit’s Tackle
By angelamontana

After an exhausting checklist rally, we shut the tailgate to the truck and were ready to head to the first trade show of the year.  On our way to Billings we promised our friend, Brian Rooney (owner of Townsend Marine) that we would haul a boat to the show for him.  The ironic part to the story is that I told him, “you better be careful Bri, I might just hook up and never come back” and his reply was, “Don’t worry Trev, I’ll leave something extra special for you.”  About the time things were starting to go good we pulled into Townsend Marine to hook up to the Lund (keep in mind it’s after hours now) and after we hooked up it was “POP” goes the fuse!  So we ended up in a 40 mph windstorm with headlamps trying to rewire a boat trailer!!  After getting ahold of Brian he had one of his wonderful employees come down and shed some light on the problem…literally.  After the minor setback, we were Billings bound and ready for action.

The next morning came very early after rolling into Billings in the middle of the night.  We had an interview with the famous outdoors editor, Brett French with the Billings Gazette.  It was quite the honor to be able to sit around a kings table with Brett and talk about the birth, growth and transformation of Kit’s Tackle.  After the interview, busier than a beehive… we were now swimming hard to get the Kit’s Tackle booth set up by show time.  We were delirious from little sleep but ready to start “Jiggin’ the Dream.”  After a wild first couple hours we moved over to the seminar room and talked a little fishing with a great group of folks.  With the evening winding down, we found great comfort in the the hotel room after the long day.

With the alarm clock crowing at 5:45 am, it was right back at it and no rest for the wicked.  I headed over to the hotel lobby to join the Montana Outdoor Radio Shows “Captain” for the Saturday morning show.  Joining us was Brett French, Dustin Bretz (old college classmate and operations manager at Bretz RV and Marine in Billings) and we had a couple good ol’ laughs on the air to start the morning off right.  Following the fireside chat, we moved over to Stella’s kitchen and bakery for breakfast.  WOOHEEEE… best breakfast I’ve ever had.  I’m pretty sure the powdered sugar on my french toast was crushed up angel wings!!  And if breakfast couldn’t get any better, a gentleman walked up to us and said, “Sorry to interrupt, but I just had to tell you that my son caught a huge rainbow on your jigs last weekend and they are awesome.”  Full from french toast and testimonial delight we packed it up and headed for the Metra for another fun-packed day on the concrete. 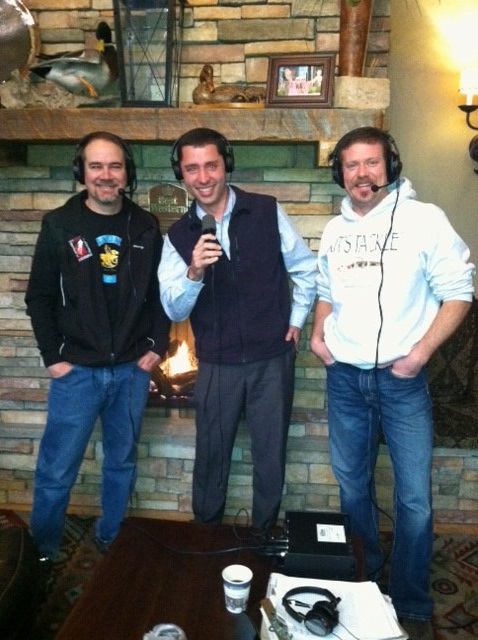 From the left: Brett French, Dustin Bretz and myself at the fireside morning chat

Getting the booth all ready to go with time to spare, I realized we had forgotten the computer in the truck so I sent dad on the mission.  A couple minutes later I received a very panicked call from dad saying, “The computer isn’t in the truck.”  After scanning the truck again and turning over the hotel room we realized I must have set it down in the parking lot when loading gear the night prior.  Instantly, all the thoughts of everything lost was souring through my mind…then it really hit me.  I had brought the external hard drive so I could back up some accounting information over the weekend and it was in the case with the computer.  Everything to do with Kit’s Tackle was gone…TRUST ME FOLKS…THERE IS A WORSE FEELING THAN LOSING A 30” WALLEYE AT THE BOAT IN A TOURNAMENT!!!

Literally feeling like I was going to puke, I had to dash outside and get some fresh air.  I thought to myself, “How could I have done this, what have I done?”  Having to give a seminar in about 30 minutes I was having doubts if I could even speak.  About this time, I saw dad round the corner with a HUGE smile on his face…he checked the lost and found and some hero had turned the computer in.  This is after we filed a report with the police and they laughed and said, “Nobody would ever turn a nice laptop in.”  A couple important lessons here folks:

1.)     Hold onto your computer tight if you are delirious!

2.)     There are still some amazing people in the world!

The first thing we did after presenting a kick butt seminar was deliver a show special pack of Glass Minnows to the gentleman that turned our computer in…what a genuine STUD!!  And speaking of the show special packs…they were the hot ticket!!  We put together a mixed pack of our favorite sizes and colors of the Glass Minnows and they created quite the buzz in the Billings Metra.  With this being said, we had an amazing show with and many sales, but more importantly than the sales were the amount of praise and the testimonials we received from the public.  We had well over a hundred people stop at our booth just to share stories and talk of the success they had with Kit’s Tackle.  Mike Albrecht even brought us a picture testimonial of his son and amongst others were stories of big striper on Lake Mead to peacock bass in Brazil.  Pretty crazy to think a product we made with our very hands is bringing such success all over the globe. 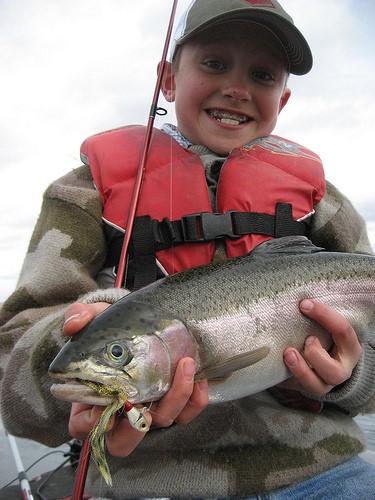 After a very rewarding and long day, we retreated to my friend Drew’s house for a home cooked meal on the road.  Talk about spoiled; not only did the elk roast taste amazing…it came with an awesome story of the harvest.  Sharing other hunting and fishing stories we had a great night filled with food and laughter.  So kudos to my pal Drew for making us feel at home and for the wonderful hospitality.  After saying our goodbyes it was back to the Clock Tower Inn to dream of giant brown trout and walleyes.

The last day was filled with more fishing excitement and wonderful fish-head conversation around the Kit’s Tackle booth.  Dad and I are grateful for every person we got to meet and visit with at the show over the weekend.  Even though we weren’t fishing, we were by all means “Jiggin’ the Dream” in 2014!