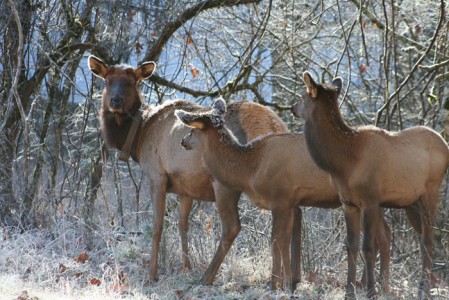 A special elk management hunt is now taking place in portions of Hunting Districts 680 and 690 in Blaine County.

The special management hunt started Jan. 17 and runs through Feb. 15 at the latest. The action approved by the Montana Fish & Wildlife Commission is aimed at harvesting around 50 antlerless elk to bring elk numbers in the Bears Paw Mountains closer to population objectives.

Fifty people who had previously signed up with Montana Fish, Wildlife & Parks to be on a game damage roster have been notified about the opportunity to use an unused 2013 elk license or a specially-issued management license during this hunt taking place on the Williamson, Biebinger, and BKB ranches.

FWP Region 6 Wildlife Program Manager Mark Sullivan said an additional batch of up to 50 hunters may be activated later, depending on the success and participation of the first group and the continued availability of elk.People who are not already on the roster, which is established annually, will not be able to participate in this hunt.

Elk population numbers in the Bears Paw Elk Management Unit (EMU) have been above the population objective for the past several years. But hunting access can be a significant limiting factor for elk harvest in the area, Sullivan said.

“The proposed management season area includes a large percentage of the elk winter range found in these hunting districts,” Sullivan said. “There have historically been 150 to 400 elk observed in this general area during the winter, indicating that a management hunt during this time period will provide the opportunity for additional elk harvest to help meet our population objectives.”

Sullivan said the best long-term solution would be expanded hunting access and pressure during the five-week general season to deal with problematic elk concentrations on neighboring private lands and help expand elk distribution in the area. Private land included in this management hunt is enrolled in FWP’s Block Management Program during the general season.

If hunters selected from the pre-established roster are successful, they must contact FWP Biologist Scott Hemmer in Havre within 24 hours of killing an elk. Any additional questions regarding this management hunt can be directed to FWP’s Havre office at 406-265-6177.