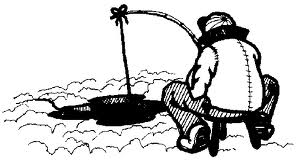 The 2014 Hebgen Lake NAIFC Qualifier Results Are In!
By angelamontana

The North American Ice Fishing Circuit had their only Montana qualifying tournament on Sunday on Hebgan Lake, near West Yellowstone. Ice anglers from all over the US competed in the one-day tournament to try and qualify for the Championship fish-off, which will take place Mille Lacs Lake in Minnesota.

Seventy-nine teams competed in the tourney on Hebgen Lake. The team of Chris McFadden and Logan Nordahl, from Montana took first place. They caught 6 fish for a total weight of 12.80 pounds. Out of the 10 teams that qualified to fish in the championship, five of the teams are from Montana.

The second place tournament winners were professional anglers, Sean Warner and Eric Wolfe, both from Minnesota, bringing in six fish weighing a total of 12.52 pounds.

All in all, it was a great time for participants and spectators alike.  Click here to see a complete and detailed list of the tournament results.