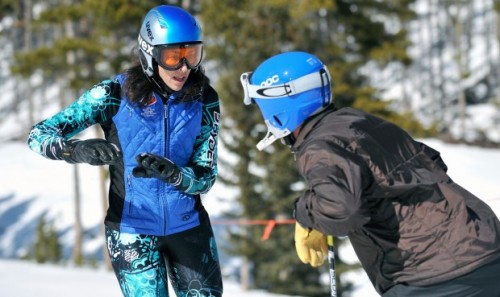 Womens-Only Ski Clinic at Discovery with Pro Skier
By angelamontana

DISCOVERY SKI AREA- This January 23rd, pro skier Lisa Densmore returns to Discovery ski area to host “Your Turn,” a women’s only ski clinic. Participants can expect a full day of instruction and analysis by Lisa and her instructors. This includes individual on snow clinics and video review for each skier.

It’s not all work though! The day starts with continental breakfast, a ski demo pairs with instruction, lunch falls in the middle, and finally the après-ski party! Expect food, fun , and prizes to go along with a full day of learning.

The clinic is limited to the first 32 women to sign up at bobwards.com. The cost is just a lift ticket, $40.00, to Discovery Ski Area. Season pass holders are free.

Lisa Densmore has been involved in many aspects of the ski world. A member of the U.S. Ski Team in the late 1970’s and a six-year veteran of the Women’s Pro Ski Tour in the 1980’s, Lisa has competed in ski racing for most of her life. Today, she is a standout on the master’s circuit, with 4 world titles and 80 national titles across all alpine disciplines. She has been the number one ranked skier in her age group and a member of the U.S. Alpine Masters Ski Team since she joined the master’s circuit 1991. In addition to competition, Lisa has been highly regarded ski instructor and coach for over 20 years.

About Bob Ward And Sons:

Bob Ward’s Is Montana’s Oldest And Largest Sporting Goods Retailer Celebrating 97 Years In Business In 2014. Bob Ward’s Is Still Family Owned And Operated, With Stores In Missoula, Bozeman, Butte, Helena, And Hamilton. Many Montanans Have Come To Rely On Bob Ward’s As A Traditional Stop To “Gear Up” Before Heading Out For Any Adventure.

For More Information, Contact Ryan Corwin, Bob Ward’s Advertising Manager At rcorwin@Bobwards.Com Or Via Phone At 406.728.3220.