A Few Favorite Firearms from Colonel Smoothbore
By OutdoorAly

As we go through life, most all of us remember times, people, places, and objects that in combination leave us with memories to cherish. For me, a few firearms that I and my family have owned over the year have contributed greatly to some very sweet thoughts of times past. I’ll tell you about a few of the rimfires; I hope you enjoy reading about them as much as I enjoy describing them.

My very first gun was a Marlin Model 39 Mountie, it was a gift for my 9th birthday. Then as today the Model 39 is a rather expensive .22 rimfire rifle. It was a bit too large for a smaller than average boy like myself, but OH did I love that rifle. I worked hard to learn how to shoot it well and the efforts paid off when at 12 I won a local turkey shoot beating some of the best shots in the county. Really cool. I still have that wonderful little carbine and it is in 98% condition. The deep bluing, rich walnut stock and forearm, and the gold plated trigger remind of my youth and the wonderful innocence of a young boy with his first rifle. 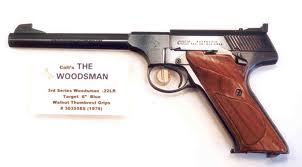 My Dad had 3 pistols that I recall fondly, only two remain in the family. The first, a Colt Woodsman, a gun designed by J. M. Browning and highly prized by Ernest Hemingway, was stolen out of Dad’s truck in 1962. A few years later we replaced Dad’s Woodsman with a Browning Nomad, a gun quite similar to the Colt. After Dad died, I became the caretaker of the Nomad; last summer I proudly passed the gun onto my nephew after the young man earned the right to own it. It is in good hands. 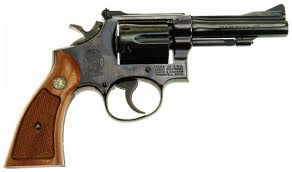 My family owns a Smith & Wesson Model K 17 Masterpiece. This .22 revolver was first owned by my paternal grandfather. I’m not sure when he bought the gun, nor whether or not it was new or used, but it is over 70 years old and still shoots very tight groups. Like nearly all S &W revolvers, the single action trigger pull is unrivaled.

A High Standard Double 9 was my first pistol. It is a 9 shot double action revolver that I carried for years. Mine is the deluxe model with a chrome finish and black grips. It is quite a stunning gun. I don’t carry it anymore, but it gets a turn at the range every now and then. Still lotsa fun.

A new rimfire rifle that has become a favorite is a Marlin 917. Mine is the heavy barrel, laminated thumbhole stock, varmint-target model. The gun has a 3-9 variable scope and is chambered in the hot .17 HMR. This rifle is a real tack driver and I use it on those stubborn blue grouse who choose to hide in the trees rather than flush. Shots to the head at 30 to 60 yards are routine with this rifle and no meat is ever harmed.

Got a favorite gun? Let me know at colsmoothbore@guncoach.net