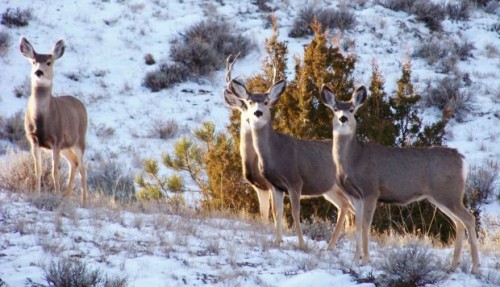 Montana’s fish and wildlife commissioners recently adopted a number of new regulations that will be in effect for the next two hunting seasons.

Here’s a summary of the most significant adjustments to the 2014 and 2015 hunting seasons:

• most general mule deer seasons will be limited to the harvest of antlered bucks.

•eliminated antlerless white-tailed deer B licenses in Regions 4, 5 and 6—except in hunting district 599-00 where the population exceeds the long term average.

•hunters holding an antlerless elk B license in many Region 1 and 2 hunting districts will no longer be allowed to take a bull elk in those districts.

•eliminated many antlerless elk B licenses in specific hunting districts in Region 4 and 5, to be replaced with B licenses valid throughout the regions.

•proposed combining six hunting districts in the Bitterroot Valley into one special lion-license area. Hunters holding this license could hunt in all six districts. The number of special lion licenses offered in this district bundle would be equal to twice the combined quotas in the six districts. The six districts would retain individual quotas and subquotas and each district would be closed to harvest when quotas or subquotas are met. A general season would remain in place to begin in Feb. 1, 2015 in districts with unmet quotas. Comment on this proposal can be submitted to the commission through 5 p.m., March 21.

•extended the spring season to close on June 15 in Bear Management Unit 200.

•increased the quota from 50 to 80 and established two rather than three time periods for hunting.

•increased the fall bag limit in Region 1 to two turkeys, including one either-sex turkey and one hen.

•allowed use of crossbows during the fall season when firearms are allowed.

•allowed use of rifles and pistols during the fall season in Region 1.

In addition to the mountain lion proposal noted above, the commission is seeking comment on proposals to allow a limit of up to 11 peregrine falcons to be taken for falconry through 2015, and on amendments to the elk-brucellosis work plan to allow additional fencing on private lands in the Paradise Valley in southwestern Montana.