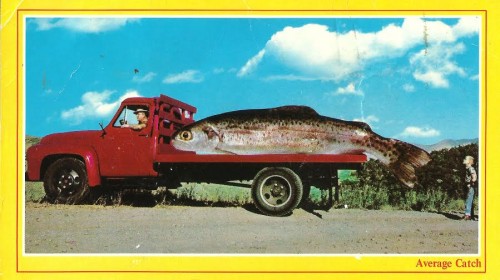 It is called “Fishing” not “Catching”. All of us have shared great “rod bending adventures” or our “limp rod skunkings”. Many writers tell stories about the “pigs, hawgs, lunkers and fishing trophies” that they have landed. 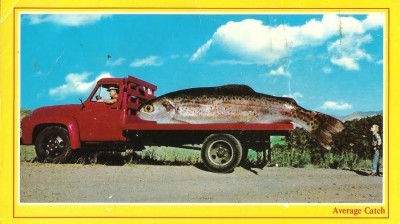 Fishermen also catch many other unique trophies that they may not brag about. For many Anglers, this may be challenging to confess. Fishermen tend to be secretive about good fishing holes, baits, and mistakes. Rarely do they admit to how many times they fell in, got snagged, or came home with an empty stringer.

All fishermen admit to catching plastic bags, trash, clothing, or the occasional diaper. We have also had our share of Mystery Snags along with the forests of sticks, twigs and trees.

I like the story about the lucky Montana fisherman trolling for walleye in the Fort Peck Reservoir. The rods bent over double and after a great battle, he netted a drowned Bull Elk, antlers and all! No Bull! I wonder if this was a Catch and Release, or did they take their catch home?

While bass fishing one night on the Potomac River in Maryland, I casted a Tiny Torpedo lure into the darkness. The little spinner blades on the lure attract bass in the darkness. These spinner blades also spin while in the air. You should hear the lure plop into the river at the end of every cast. When it didn’t make the “plop” sound, my Dad began scolding me for missing the river and snagging onto the bank. My rod was bent and the drag was going out. I had hooked something. After a great battle, I reeled in a huge BAT! My Dad netted it from the air! To unhook a net-tangled bat safely while saving your $3.00 lure, is a tough job. Fortunately, after using some pliers and a towel, we set “Batman” free.

Fly fishing around barnyards is common along the limestone streams of central Pennsylvania. The trout are smart and you must focus closely to be successful. It was that one time when I forgot to watch my backcast. “Tight lines and a Screaming reel” told me I was into a “Pig”, or more correctly, a huge Guernsey milk COW! Man did she fight hard. I was amazed at how my size 18 barbless dry fly held fast. With tippet maxed out and onto my backing, I let the monster break off. There was no way she was going to fit into my little trout net anyway.

Fishing line is a common sight around waterways. Responsible anglers pick it up for recycling. While fishing on a lake in Quebec, I snagged a line and began to handline it in. To my surprise, something was on the other end. Slowly, the dead weight drifted alongside of the boat. The next thing I know, I am laying in the bottom of the boat screaming like a little girl. The end of the line was attached to a very healthy, huge 50 plus inch Northern Pike. Of course, I thought it was an Alligator or Great White shark! After several attempts, “Jaws” was safely set free.

Body parts are also listed on my “Wall of Shame”. Ears, noses, heads, and other meaty targets have all ended up on my life-list of fishing trophies. As a fishing guide, I would often wear a Huge Hat that would also double as a protective helmet. Many rookie casters would manage to catch the Guide instead of the fish.

While fishing for trout in Yellowstone Lake, my wife managed to snag our 9 year old son in the top lip with a size #8 “Spin-a-lure”. He was swimming with his sister 20 yards away. I was actually amazed that she could actually hit anything with her rusty casting skills. The treble hooks had sunk home and she reeled in her screaming little boy! A quick trip to the park hospital saved the day.

Trees and shrubs are also a common catch. When the Shad run is on along the banks of the Susquehanna River, droves of anglers line the river to hook the “Poor Man’s Salmon”. The shoreline trees become decorated with thousands of shad darts, spoons, and lures. I always carry a pair of hand pruners so I can perform some tree pruning and retrieve a stockpile of lost lures.

It is called “Fishing” not “Catching”, but it is sure fun to catch something. If we include everything we catch, it is a sure fact that we always “Catch our Limits” of fun and memories!