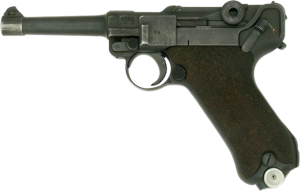 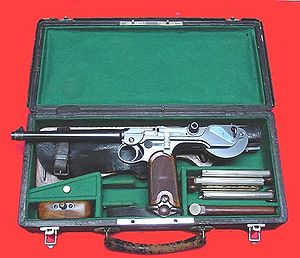 The first semi-auto handguns had their beginnings with American Hiram Maxim’s recoil operated machine gun. Maxim did have some designs for small recoil operated guns, but none of them ever saw production. The first successful semi-auto pistol was invented and marketed by Hugo Borchardt. The toggle action C-93 arrived on the market in 1894 and was chambered in the 7.65mm Borchardt, the cartridge which the C-93 was designed around. One of Borchardt’s aides was another German, Georg Luger; we’ll hear more about him later.

In 1896, another great German gun designer, Paul Mauser, produced the C-96 “Broomhandle” semi-auto pistol. The pistol was chambered in the powerful 7.63×25 Mauser bottle-neck cartridge. This was the highest velocity pistol round available until the .357 Magnum came into being in 1935. The C-96 had an integral box magazine and was loaded with stripper clips. The gun could be equipped with a holster that also could be used as a shoulder stock. During WWI, some C-96s were chambered in 9×19 Parabellum. The above photo shows the big bright red “9” on the pistol grip that warned soldiers of the difference in caliber from the original C-96. 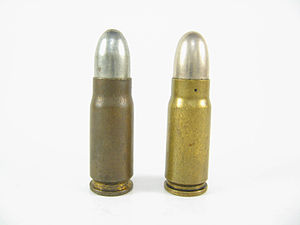 After its use in WWI, the C-96 saw continued service in many civil wars on the continent and around the world. It was used by the German war machine in WWII. Winston Churchill and T. E. Lawrence (Lawrence of Arabia) were said to be very fond of their C-96 pistols.

In 1898, Georg Luger patented his Pistole Parabellum 1908. This gun employed a toggle mechanism much like the Borchardt C-93. It had a detachable magazine and originally was chambered in 7.65 Parabellum. Luger soon developed the 9mm Parabellum (para bellum: a Latin phrase that means “prepare for war”). The Luger P-08 became the iconic symbol of the German military, and a shape recognized worldwide. But the most important development to come from Luger was the development of the 9mm Luger cartridge. 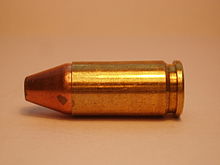 As stated earlier it is also known as the 9mm Parabellum and the 9×19. This is the most popular pistol cartridge ever produced and is still the number one chambering worldwide. Over the last 20 years development of new bullets and powder have resulted in a much more efficient and lethal 9mm cartridge, making it a great personal defense round.