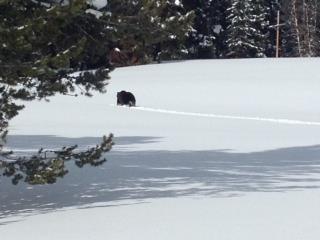 Grizzly Bears Waking from Hibernation in Yellowstone Park
By OutdoorAly

Winter was predicted to last well into March, that is according to Punxsutawney Phil the groundhog and his shadow. But, grizzly bears in Yellowstone don’t seem to agree and have been emerging from hibernation this week.

Yellowstone Park issued a news release warning hikers, skiers, and snowshoers to stay in groups and keep a eye out for bears since the first confirmed report of grizzly activity in the Park on March 4. Here is part of the news release from YNP website:

Grizzly bears are emerging from hibernation in the Greater Yellowstone Area, so hikers, skiers and snowshoers are advised to stay in groups of three of more, make noise on the trail and carry bear spray.

The first confirmed reports of grizzly bear activity in the Park were reported on March 4. Guides and visitors observed and photographed a grizzly bear along the road in the Hayden Valley area. The first black bear of the year was observed on February 11 near the south end of the park.

Bears begin looking for food soon after they emerge from their dens. They are attracted to elk and bison that have died during the winter. Carcasses are an important enough food source that bears will sometimes react aggressively when surprised while feeding on them.

Updated bear safety information is available on the Yellowstone bear safety Web page at http://www.nps.gov/yell/planyourvisit/bearsafety.htm and in the park newspaper, which is distributed at all park entrances. The park also implements seasonal bear management areas closures to reduce encounters between bears and humans in areas where elk and bison carcasses are in high density. A listing of these closures can be found at http://www.nps.gov/yell/parkmgmt/bearclosures.htm.

The full news release can be found here.