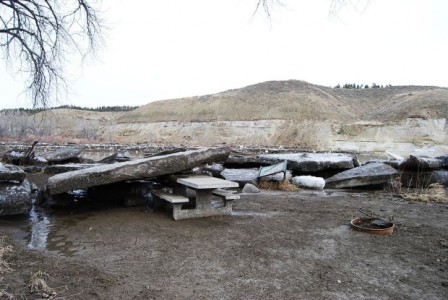 It was reported this morning that an ice jam is causing trouble on the “Mighty Mo”. The Bureau of Land Management closed boat launches in Virgel and Loma due to the ice jamming into campgrounds and recreation areas.

Here is the full story from the Missoulian:

BILLINGS, Mont. (AP) — Flooding and ice jams have prompted federal officials to close most boat launches along a 149-mile stretch of the Upper Missouri River in central Montana.

Floods that began in early March pushed ice blocks up to 4 feet high into campgrounds and recreation areas overseen by the U.S. Bureau of Land Management.

BLM spokesman Jonathan Moore said Friday the ice has blocked the launches and could delay campground openings later this spring.

Launches are closed in the communities of Virgelle and Loma and where the river intersects with Route 236 southeast of Big Sandy and U.S. Highway 191 in Fergus County.

The BLM says the above average snowpack in the Upper Missouri basin could cause more hazardous flooding in coming months.