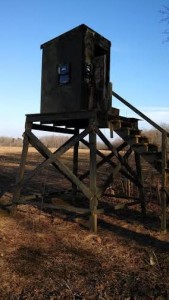 This year’s deer hunting season ended with several bangs! Montana Grant was chosen to participate in a “Crop Management Program”. His “Last Stand” was in a weatherproof Tower Stand with windows, a heater, and a comfy swivel chair. Now before you think Montana Grant has turned into a Wussy, let’s take a closer look.

Understanding our role as Wildlife Management Tools is important for sportsmen today. One of the primary reasons that hunting still exists, is so we can manage the health of our wildlife, habitat, and populations. Thanks to legal hunting and Wildlife Management, deer herds are larger and healthier than ever. The revenue and taxes generated through hunting and fishing licenses and equipment, pays the bills so everyone can enjoy the great outdoors. 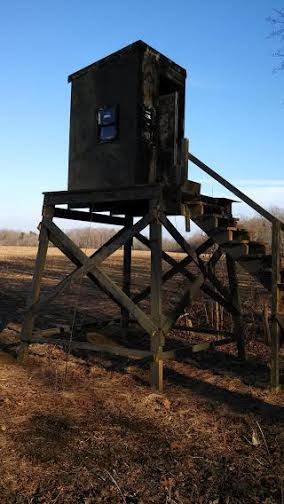 Everyone sees deer and animal populations differently. For some of us, a field full of deer means dinner. Others may think the critters are having a party and talking to “Winnie the Pooh”. Dense deer populations eat the profits of many farmers. Motorists and Insurance companies look at deer as a safety hazard and expense. Health professionals are aware of the issues that result from too many deer, such as Lyme’s disease, CWD, and other health concerns. Gardeners see their azaleas and flowers disappear as larger urban deer herds continue to grow. Animal and insect overpopulations can result into health concerns for humans.

Animal birth control is also expensive and inconsistent. It is one thing to deal with captive herds such as cows, but quite different to address wild populations. Keep in mind that a “doe” can give birth to triplets and twins in a normal season. Males mate with many females. This means that even with a healthy hunting season that reduces the herd size by 50%. Spring can result in a new population over twice as large as the previous fall season.

Road kill and weather certainly account for a huge reduction in critter populations but results in waste, accidents, and indiscriminate death of the populations. The outcome is sad and dangerous.

The best alternative is to allow experienced, licensed, trained Sportsmen to handle this task. The deer harvest is more ethical and the meat will find a welcome home. These management hunts generally happen after the regular season, which also supports the harvest of deer and other critters. There is little to no cost for the taxpayers.

If humans don’t address the critter populations, Mother Nature will. She can be harsh, cold, and merciless. Hunters harvest and utilize the meat that results from the hunts. Wildlife Managers obtain data and information that support their efforts to maintain our healthy environs. Check with your local agencies to learn more about how they distribute Crop Damage Permits or manage Urban Hunts.

Wise landowners understand the science of land management and conservation. They invite ethical sportsmen to selectively harvest antlerless deer. In this way, they can maintain healthy and appropriate critter populations while minimizing damage to their land and crops. Wise Wildlife Management means smart Habitat Conservation.

My “Last Stand” was a comfortable Box, 15 feet in the air. I was perched on the edge of a wheat field with broad, safe views. The landowner had 30 tags to fill and we were told to harvest antlerless deer only. Each evening we stood vigil and waited for the feeding deer to enter the field. Some would run and some would walk. Most deer were does or button bucks. The larger bucks still carried their antlers and were allowed to pass. Next season, they would be larger and the best genetics would remain in the deer herd.

I chose to use my father’s Weatherby 7mm rifle. He no longer hunts and I thought it would be a treat to at least take his rifle afield. The accuracy and effectiveness of this hunting tool allowed me to quickly and ethically harvest my targets. With several one shot kills, I was able to feed several families, help out a farmer, and celebrate my skills as a hunter. With each tagged harvest, we said a “Hunter’s Prayer” as we respectfully completed our hunting harvest chores. When I next visited my Dad, I presented him with several spent shell casings and told him the stories. Most shots were 100-350 yards. This great hunter’s tool was still being used and had a purpose.

This kind of hunt is not about how many, how big, or bragging rights. Instead, the hunt was about my role as a Wildlife Management Tool. We learn and tune our hunting skills for a purpose. As sportsmen, we must take ownership and responsibility for our actions and role when afield.

When the dust and smoke cleared at the end of the day, Montana Grant’s Last Stand was about being a good hunter and Sportsman.