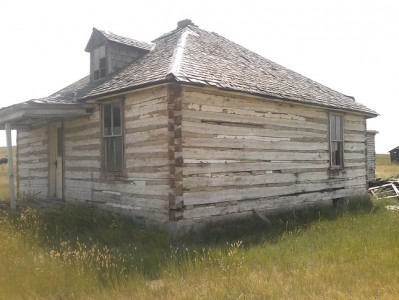 By now we are not surprised when a Californian snatches up some real estate and moves to Montana. But this is a rare case where someone is moving some Montana real estate to California!

A pair of Montana homesteader cabins from the late 1800s are being installed in Twitter’s new digs in the historic Western Furniture Exchange and Merchandise Mart building, a 1937 art deco landmark on Market Street in San Francisco.

The social media company will use the cabins as a sort of cafe/break area for their employees. The cabins  will be refurnished with new dining booths and be placed within a larger open floor plan as a way to break up the space.

The building used to be an old furniture mart and the specialty design elements of the renovation are being done by Olle Lundberg of Lundberg Design, a San Francisco architectural firm.

“We’ve used the notion of the forest as a nice tie-in with Twitter and its bird logo,” Lundburg told the Marin Independent Journal. “To me, the log cabins fit into that since, obviously, they’re made from logs that come from the forest.”

Lundberg bought the cabins for an undisclosed price after seeing an ad on Craigslist placed by Novato contractor Karl Beckmann, who salvaged them from a couple of remote ranches in small Montana towns.

The cabins will be taken apart, shipped, and then reinstalled in the headquarters in San Francisco.

For more of the Marin Independent Journal story click here.