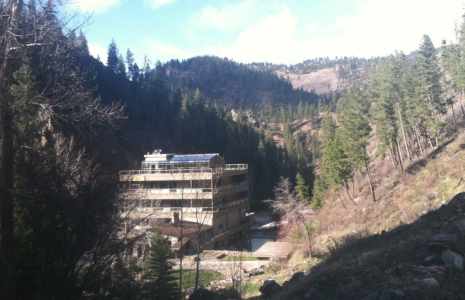 Typically if you have heard of Sleeping Child hot springs, you have either lived in Montana long enough to remember the old A-Frame rustic public hot springs, or you are lucky enough to know one of the current local owners of the now private property.

But lately there is another group of people talking about Sleeping Child hot springs.

The hot springs property is up for sale and the sale announcement caught the eye of Hamilton resident Dorinda Troutman, who immediately set up a Facebook page “Sleeping Child hot springs for all”. She believes the property has potential to become a public resort once again.

And while the idea of a public hot springs is fantastic, the logistics of transitioning this property to the public is much more complicated than creating a lofty Facebook page or holding a public meeting.

The current property is in no way set up to be used as a public facility. There would have to be drastic remodeling involved to even provide simple amenities such as parking.

Monetarily speaking, there may be a reason this property is “in the hands of the wealthy”, as Troutman put it recently in a letter to the Missoulian editor. That same reason may be why the property was foreclosed on and has been on the market just shy of a decade: it is expensive to maintain.

If passed on to the public, where would the funds come from? Who would be the owner and provide upkeep? How much would it cost to remodel the property to accommodate large groups of people?

These questions are just the start of a complicated and costly process. It may be easy to click “like” on Facebook, but this transition will not be as easy.

If you care to join the discussion or be a part of trying to make Sleeping Child Hot Springs a public facility, you can find the Facebook page here. The next public meeting is March 27, 6:30 pm, at the Bitterroot Public Library downstairs meeting room.

Until Sleeping Child hot springs is sold, whether that be to a public organization or private owner, it is currently available as a vacation rental on VRBO here. 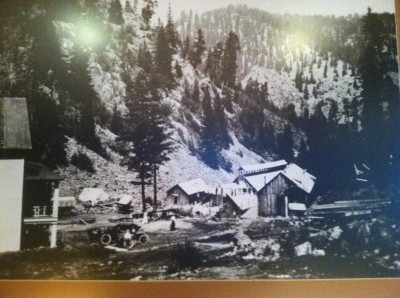 History of the hot springs:

The hot springs has always been a place of retreat and relaxation going back to the days when the Nez Perce were battling Gen. Oliver Otis Howard. According to this travel article publish on philly.com:

Gen. Oliver Otis Howard pursued the Nez Perce Indians into this valley, and when the soldiers got too close and a battle appeared imminent, the Indians left their infants by the hot springs.

The Army passed, never noticing the children sleeping peacefully nearby.

Once a popular public resort, the hot springs was privatized by Ed Chopot, who tore down the old hotel and built a five-story, 25,000-square-foot home with a dozen bedrooms, 18 bathrooms, a seven-car garage, five guest cabins and a heated heliport.

A self-made millionaire from Spokane, Chopot fled the U.S. in 2003 after he fell $12 million in debt to Las Vegas casinos. He was later found murdered in Costa Rica.

The expansive property recently appeared on the market again under co-owner Harold Mildenberger, with an attached price tag of $12.9 million. 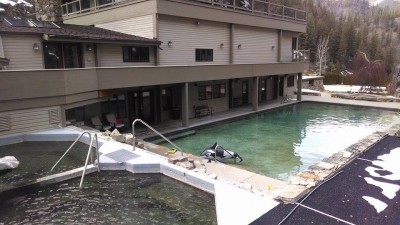