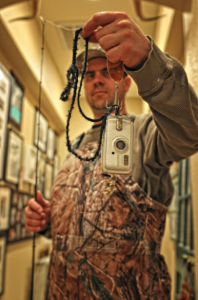 Nevada Fisherman Reels in Camera, and Memory Card with 5 Years of Photos
By OutdoorAly

There are a lot of tall tales out there when it comes to fishing, but this one might be a story for the books. An angler on Lake Tahoe, Nevada was out for a day of fishing and relaxation when he snagged what he thought was a fish. Upon reeling it in he was shocked to find a waterproof Pentax camera on the end of his line. Even more surprising was that the memory card in the camera was not damaged and the angler was able to track down the owner in Utah through images found on the card.

The treasured memories belonging to Jana LeVitre, who had lost her digital camera in 2011 while sailing in the same lake. When she dropped it in the water, there was almost no chance of ever getting it back from the 200 foot deep water.

You can imagine her shock when she recognized a photo from the camera on Facebook, with the message, “Is this you? Or a very close look-alike?”

The fisherman, Stephen Garnett, had taken the camera home and his wife Jamie set out to get the shots, spanning from 2006 to September 2011, back to their rightful owner. She took to Facebook and posted two photos from each year hoping that someone in her network of friends would lead her to the mystery photographer, and it worked. In just under a week the owner of the camera and images was found.

More details can be found on The Salt Lake Tribune.