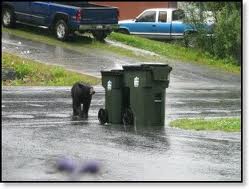 Thirty-seven bear resistant garbage cans will be distributed over the next few weeks in the Sixmile and Ninemile area west of Missoula as a result of a large public and private partnership to reduce bear conflicts in the area. Partners will have placed a total of 108 cans on the ground since last fall.

In 2013, the Missoula-County Resource Advisory Committee awarded a $21,000 US Forest Service grant to the citizen and volunteer based Ninemile Wildlife Workgroup to reduce bear conflicts in the Alberton, Ninemile and Huson areas. Republic Waste Collection Services of Montana contributed another $9,000.

These partners, along with the Lolo National Forest, Montana Fish Wildlife and Parks (FWP), and Defenders of Wildlife have long prioritized the western rural reaches of Missoula County as a place to reduce bear conflicts.

“These drainages west of Missoula are important bear habitat and corridors that bears and other wildlife regularly travel through,” said FWP Bear Management Specialist, Jamie Jonkel. “We want to make sure that bears keep moving, instead of settling in and around homes where conflicts are more likely to occur.”

And the best way to keep bears moving, Jonkel explained, is to reduce opportunities for bears to receive garbage and other unnatural food rewards that encourage them to stick around.

For nearly a decade the Ninemile Wildlife Workgroup has distributed information on ways to keep bear attractants contained, provided low cost bear spray to residents, sponsored workshops on how to construct bear resistant electric fences, maintained a website with information on living with wildlife, and has encouraged residents to purchase bear resistant canisters.
“We’ve had a lot of neighbors come together to reduce wildlife conflicts,” said Pat Sweeney, Chair of the Ninemile Wildlife Workgroup, “But this recent grant, combined with contributions from Republic Services, enhanced our efforts tenfold by making it much easier and affordable for all of us to keep attractants secured.”

Bear resistant garbage cans are sturdier than traditional cans and have a locking mechanism to prevent bears from opening the lid.
“The bear resistant canisters distributed as part of this recent effort are provided at no additional cost to our customers,” said Max Bauer, Republic Services Manager in Missoula. “Along with the new canister, we are distributing materials that explain how the cans work and provide tips on keeping wildlife attractants secured.”

According to Jonkel, the new bear resistant cans will go to places where most recent bear activity and conflicts have occurred.  “All the project partners and some area residents sat down and prioritized those spots to place the cans,” said Jonkel. “We will need to keep looking for ways to get more bear-resistant containers out there, but this recent effort made a big dent in the priority areas.”