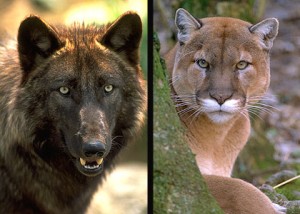 Predator VS. Predator
By angelamontana

“While the population of resident wolves in Washington state has been growing, with four new packs established over the past year, wildlife experts know the next logical place for a new pack could well be in the forested Cascade foothills west of Yakima,” according to a recent article on the Yakima Herald website.  But, nobody can predict when.

With several reports of wolves around the Yakima area, some of those reports have turned out to be coyotes, but some have actually been wolves.  Along with a wolf sighting increase, the number of mountain lions in the area is also on the rise, and the “plentiful population” of mountain lions may be slowing the expansion of the wolf population to that area of the state. Both predators are drawn to “the same sort of ungulate prey that attracts wolves, have long been well-established on the Central Washington landscape, and are apparently willing to defend their territory against the region’s newest predator — or eat it”.

Earlier this month, a cougar killed and partially devoured a radio-collared wolf north of Ellensburg, a year after another collared Washington wolf had been killed by a cougar. This month’s victim was a young male, almost 3 years old, that was believed to be dispersed from the Teanaway pack.

“A lone wolf doesn’t stand a chance against a lion,” Becker said. “A lion’s a pure predator. If you have a pack of wolves, that’s a different story — in that case, I think the lion’s going to run away. But (against) a single wolf, or even two, a lion would be able to hold its own in just about any situation.

“And (cougars killing wolves) may happen more than we know, because those two (fatalities) just happened to be wolves that had radio collars on. Whether that’s happened to uncollared wolves, we don’t know.”

With mountain lions seemingly making an attempt to help control the wolf population in Washington, they also have been reported doing the same in Montana, according to gameandfishmag.com, as back in 2012, there were two radio-collared wolf carcasses discovered in the Bitterroot valley.  Based on their injuries, the wolves were said to be killed by mountain lions.  One was discovered early in the year with a deer carcass nearby that the two predators seemed to be fighting over, while the other kill had no type of carcass nearby that the two would have been fighting over.

With mountain lions and wolves moving closer and closer into residential areas in the northwest, it is clear something needs to be done…but, what?

To read the full story on the Yakima area wolves by the Yakima Herald, click here.