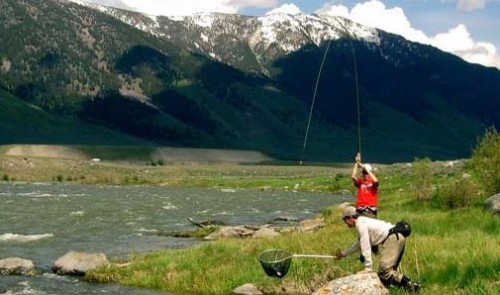 River drainages across Montana are currently enjoying a healthy snowpack that is currently 120-155% of average depending on the watershed. The months of April and May are historically some of the wettest of the year so the final verdict on our snowpack levels will depend greatly on our weather patterns the remainder of the spring. If we have a wet and cool spring we will likely experience a high water year. If we have a warm and dry spring our snowpack could easily come back down to average levels. At this point it looks like we will still have nice flows in the rivers during the summer season even if we experience a dry spring. So assuming we are heading for an above average snow year (but at this point nothing like the run off of 2010) what can we expect for the coming 2014 fishing season across Southwest Montana?

April and early May

Mid spring is traditionally pre run off. This time of year is a wild card on some fisheries. Right now we still have a lot of low elevation snow so when early warm spells hit it can raise rivers and spoil good spring hatches like the baetis, March brown and Mother’s Day caddis. If we have a nice pulse of warm weather that clears out some low level snow and then we drop back to average temperatures the spring fishing can be fantastic. If we still have a lot of low elevation snow the legendary Mother’s Day caddis hatch on the Yellowstone might occur during the early stages of run off. Some fisheries like much of the Madison, the Missouri near Craig, and the Beaverhead are protected by dams and the fishing is not affected much by early pulses of low elevation snow melt (note that not all sections of the Madison and Beaverhead are open in April and early May).

Mid May to Mid June

This will be run off season across Montana. With an above average snowpack run off will last into July on some rivers such as the Yellowstone. While many rivers in the state will be running high and dirty there are still some great fishing opportunities across Southwest Montana during run off. Tailwaters below dams fish very well in run off, these include the Beaverhead, Madison, Missouri near Craig, and the Bighorn. There are also some smaller streams that flow below dams in Montana at this time of year that can be quite good. Spring creeks are also outstanding during the run off period and are completely unaffected by run off. Famous spring creeks such as Nelson, Armstrong and DePuy require rod fees but are highly recommended at this time of the season. Finally lakes and irrigation reservoirs on private ranches are often at their best at this time of year and often produce some trophy trout.

Traditionally early summer is a time of compression on rivers across Southwest Montana as water levels drop and clear. With an above average snowpack some freestone rivers without much influence from dams will likely begin clearing in Late June while others such as the Yellowstone will mostly likely not become fishable until early to mid July. Generally the Big hole, Jefferson and the parts of the Madison influenced by dirty tributaries will clear first. The rivers that drain the higher elevation regions of the Absarokas and Beartooths such as the Yellowstone, Boulder and Stillwater typically drop and clear about a week to 10 days after the Western rivers. As rivers are dropping and clearing the fishing can be spectacular with streamers and nymphs and eventually attractor dry flies. This is another window of time when aquatic hatches are prolific. On a big water year water temperatures stay cold longer so aquatic hatches are often delayed by a week or more compared to low water years. During this period of intense aquatic insect hatches trout will focus their feeding during the three to four hour daily window when the hatch occurs. Prior to the hatch fish nymphs imitating the appropriate species. During the hatch nymphing can still be effective, especially with emergers but if you see surface takes switch to dries with an emerger trailing just behind the surface pattern.

The effects of a good water year will carry all the way into August. Although flows will be down in August a little extra flow helps to maintain cold water temperatures all the way into the heat of the summer. This extends the productive fishing windows on lower elevation rivers farther into the summer. So on an above average snow pack year like we have now we generally benefit from better than average August and early September fishing. Most aquatic hatches have ended by August with the exception of tricos on some waters like the Missouri or the callibaetis on Hebgen and Ennis lakes. Trout become opportunistic in the late summer and a variety of patterns can produce. When nymphing we like to always fish a larger pattern as the lead fly trailed by a smaller attractor nymph. Flies such as sculpin patterns or a big stone for the large fly can move big trout and smaller size 18 or 20 attractor nymphs like lightning bugs, princes, and copper johns can produce on smaller trout. For dries terrestrials tend to be the most productive so choose your favorite hopper, beetle and ant patterns. Often dry fly fishing is best in the afternoons when terrestrial insects are most active.

By the time we get to mid September most of the affects of a big snowpack have diminished and this time of year is very predictable regardless of a high or low water year. Irrigation slows dramatically in mid September which allows flows on lower elevation rivers like the Jefferson, Upper Missouri, and Lower Gallatin to rebound. This coupled with longer nights brings water temperatures down and produces good fishing. Some browns are just starting to move but often the same fishing patterns that produced in August and Early summer continue to work – attractor nymphs and terrestrials. A sparse selection of mayflies can begin hatching along with early baetis which can also start to produce good dry fly fishing in back eddies and foam lines.

All rivers are running at base flows which are just a bit higher on high water years than low water years but by this time of year the previous years snowpack is long gone so from year to year conditions are similar in the late fall. This is always an exciting time to fish with good dry fly fishing over baetis hatches occurring in the slicks, back eddies and foam lines on larger rivers like the Missouri and Yellowstone. Big brown trout are now running in full force and targeting pre spawn browns often produces the biggest trout of the season. Fishing large streamers or dead drifting big nymphs trailed by an egg pattern can be deadly this time of year.

For fishing reports in other areas of Montana, click here.