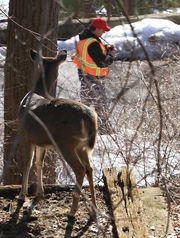 From left, Rick Naugle with the HSUS walks along a street in Hastings as he tries to get a better shot with his dart gun to give contraceptives to a group of deer March 11, 2014.(Photo: Frank Becerra Jr., The Westchester County, N.Y., Journal News)

To reduce the deer population in Hastings-on-Hudson, New York, the village is trying to keep its female deer from getting pregnant by injecting them with a contraceptive vaccine, according to usatoday.com. That has researchers from the Humane Society of the United States cruising the streets in search of deer.

“This is a lot like hunting. You have to figure out where they’re at and how to get close enough to get shots at them,” said Rick Naugle <of the HSUS>, who has been studying deer and their reproduction since 1994.

The 120 deer have become a nuisance by not only becoming a potential danger to drivers but also because they are eating every plant they can find, including residential gardens, park greenery and more.   The mayor of Hastings-on-Hudson said “lethal options aren’t possible in the densely populated village because of laws limiting hunting, as well as public opposition”.

This study is among the first to test the vaccine in an area where deer can freely enter or exit, as previous efforts focused on island populations or places with limited access.

The process may not be as easy as it seems, as in the week Rick Naugle and Kayla Grams were out in search of deer to vaccinate, they only managed to get one.  Naugle believes that at this time next year, they will have “everything figured out”.

I can’t imagine if this became a form of wildlife management in Montana, but I suppose anything is possible these days.