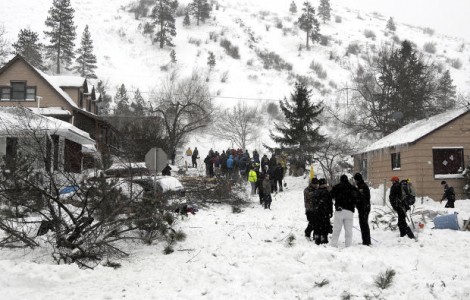 The woman buried in Mt. Jumbo’s avalanche this past Friday has died, according to the Missoulian website.  Here is their full story from missoulian.com: 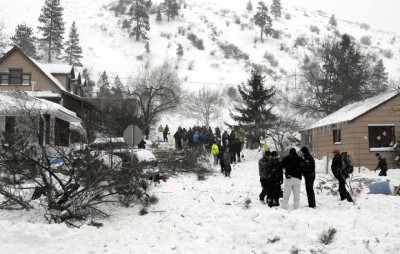 The corner of Van Buren and Holly streets was a scene of devastation as first responders, neighbors and volunteers showed up to aid in the search. The avalanche appeared to come down a ravine on Mount Jumbo.

Michel Colville, 68, was in her home when the slide hit the residence, burying her for nearly three hours before she was found by rescuers. She died Sunday night.

Her husband, Fred Allendorf, also was buried and remains hospitalized in serious condition.

An 8-year-old boy pulled from the snow was released from St. Patrick Hospital on Sunday and is expected to make a full recovery.

Missoula Police Sgt. Travis Welsh said Monday that Colville succumbed to the injuries she suffered in the avalanche.

He also reported that Missoula police now can confirm that “snow enthusiasts” have been interviewed about the cause of the avalanche. No charges are pending, he said. However, police detectives will meet with the Missoula County Attorney’s Office to discuss any potential criminal culpability.

Watch Missoulian.com for updates on this story.

(Information and photo via missoulian.com)