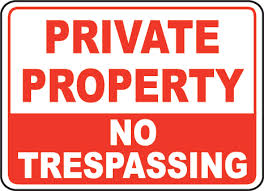 How Do YOU Define “Private Property”?
By angelamontana

When you see a “No Trespassing” sign or a “Private Property” sign, do you believe that there actually is private property there and that the property owner does not want trespassers, or do you think the signs were posted with the intention that nobody would obey the request?

It is unfortunate to see there are some people who have no regard for the law and other people’s boundaries.  I recently stumbled across an article involving the incident where Jeffrey Kline and Brett Birdwell, of Lancaster, Pennsylvania, were awarded $24.2 million by a federal jury after being “severely burned by electrical wires” after trespassing onto Amtrak and Norfolk Southern railroad companies’ land.  The two were 17 years old at the time and were climbing on rail cars to enter the posted private property. The lawsuit won the two trespassers a whopping $24.2 million.

So, what exactly does this say to people, especially teenagers and young adults?