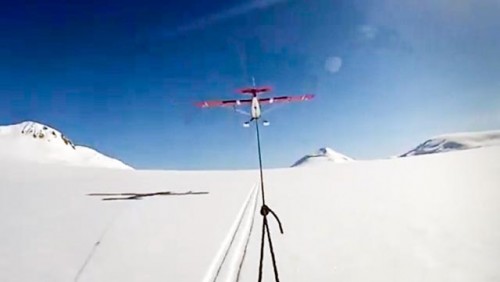 Airplane Tows Skier up a Mountain!
By OutdoorAly

All the ski lifts have closed for the season around Montana, but who needs a lift when you have an airplane to tow you? U.S. Ski Team member Reese Hanneman can be seen being towed up a mountain somewhere in the Alaska Range behind an Aviat Husky in a video that was posted to YouTube a week ago.

Hanneman tweeted a link to the video and the Alaska Dispatch followed up with an article that points out, among other things, that the stunt probably ran afoul of federal aviation regulations.

Federal Aviation Regulations are quite strict, but can also be a tad ambiguous at times. Flying magazine had this to say about the video footage:

Of course, Hanneman personally didn’t break any laws we’re aware of by agreeing to be towed behind the airplane as it lifts off on skis for the short hop up the hill. The N number of the airplane isn’t visible, nor is the pilot identified. And anyway, there doesn’t appear to be anything especially dangerous about the quick flight, especially considering that Hanneman of Anchorage is a champion cross country ski racer who is accustomed to going fast.

More from Flying magazine can be found here.