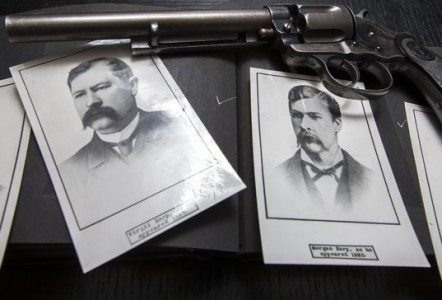 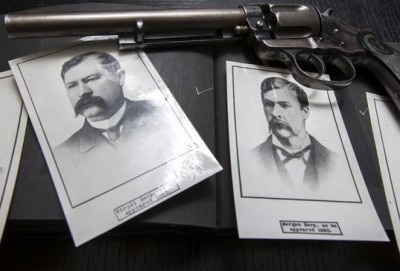 How would you like to own a piece of history?  How would you like to own two of the guns that belonged to Arizona’s most famous lawman, Wyatt Earp?  According t0o azcentral.com, “J. Levine Auction & Appraisal in Scottsdale is auctioning the guns, which owner Josh Levine believes belonged to Wyatt Earp.”  The auction is scheduled for August 17th in Scottsdale, Arizona.

There are, however, skeptics that question the authenticity of the items, considering they came from controversial author who wrote three books about Wyatt Earp, Glenn Boyer.  Other researchers have challenged the authenticity of Boyer’s works, and Boyer has admitted that one of his books was a combination of fact and fiction, leaving his credibility in question.  The Colt .45 revolver, that is said to have belonged to Wyatt Earp and possibly used at the shoot out at the OK Corral, is also missing the serial number.  Although, there was X-ray testing done that proved the original serial number matched up with the gun, therefore showing proof that the gun did belong to Earp, it will take more than that to convince some of the origins of the revolver.  Boyer will also produce a sworn affidavit, along with other expert findings, to the winning bidder of the revolver.  Would that be enough proof for you?

The items up for sale include:

Check out the video below, and get the the full story on the items and more details on the auction from azcentral.com by clicking here.

(Photo and information credit to azcentral.com)