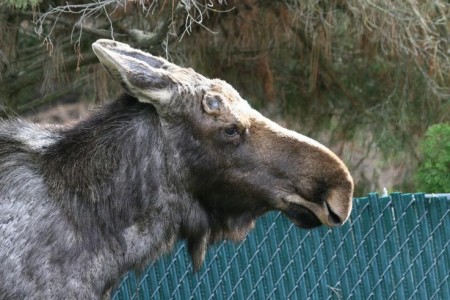 “Ghost Moose” Emerging from Woods this Spring
By OutdoorAly

No they aren’t vampire or zombie moose, but they may as well be among those categories because these moose are being tortured and sucked dry by ticks.

A single moose can carry more than 100,000 of these bloodsucking moose ticks, and according to New Hampshire moose project leader Kristine Rines,  sometimes these anemic, infested animals are transformed into “ghost moose.”

One such moose wandered into a Spokane, Washington neighborhood recently and was captured on film by wildlife enthusiast and photographer Hans Krauss.

This condition happens when the moose “have scratched all winter long trying to get the ticks off, and they break their hair all off, and because the hair follicle is broken you see the white inner portion,” says Rines “And they literally look like ghosts.”

It is possible these parasites, along with many other factors, could be contributing to the nationwide moose decline.

Spokesman Review blogger Rich Landers did a little more investigating on the Hans Krauss photo that he came across. Here is his story recently published:

Hans Krauss, a Spokane Valley wildlife enthusiast and photographer, shot these photos of a bull moose in the Ponderosa neighborhood a few days ago.

What first caught his eye are the bases of where antlers had fallen off, and where the new antler growth soon will be sprouting.

But my first reaction was, “That poor bugger is infested with ticks.”  If the grayish look, and the hair rubbed off in patches including the ears aren’t an obvious clue, the engorged ticks on the moose’s rump are graphic.

Indeed, Krauss’s email with the photos came while I was on the phone conducting an interview with Rich Harris, the Washington Department of Fish and Wildlife biologist in charge of special big-game species, such as moose. I was researching the decline of moost published for stories published in the Sunday Outdoors section.

…. Would appreciate your ideas. Rich Landers sent me these photos yesterday, nice close up of a bull photographed yesterday. He looks somewhat emaciated to me, and I wonder if this amount of grey color is shedding, old age, ticks, normal end of winter condition, or other? What do you think?

The whitish-grayish coloring of the legs is normal.

The thin hair and whitish-grayish coloring in the saddle area, neck, and rump are where he’s been scratching at winter ticks. I think you can even see several ticks in his perineal area.

He does look thin, but not really emaciated to me. Kind of what I’d expect this time of year in an animal that appears to have had a miserable winter dealing with lots of ticks.

Spokesman Review article can be found at this link.