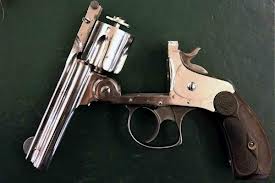 Every once in a while I struggle a bit finding inspiration for a post. This was one of those weeks; that is until I conducted a NRA Basic Pistol class that last Sunday. One of my students brought an old Smith & Wesson top break revolver to class. This is a really cool old gun. It has a nickel finish that is in really great condition, and is chambered in .38 Special. I’m not sure how old the gun is, but seeing the gun got me to thinking about the early history and production of this classic handgun. 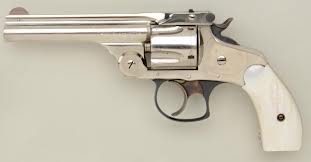 It took Horace Smith and Daniel Wesson a couple of tries to be successful firearms manufacturers. Their first attempt, The Volcanic Repeating Arms Co., was, for the most part, a dismal failure. One of the investors, shirt maker Oliver Winchester, obtained ownership of the company’s assets and after a few years renamed it the Winchester Repeating Arms Co. We’ll take a look at Winchester in a later post. 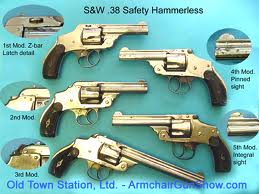 In 1856, Smith and Wesson reunited to form a new company. They introduced a revolutionary pistol, the S&W Model 1. It was a repeater that fired a self-contained rimfire cartridge and the world of handguns hasn’t been the same since. In 1869, they came out with another new gun, the Model 3 American. This gun fired more powerful centerfire cartridges and eventually became the go to pistol for many of the militaries of the world, especially Czarist Russia. While the US Army did order some Model 3s, the gun was not chambered for the 45 Long Colt cartridge. The US Army had bunches of that ammunition and decided that the SAA Colt pistol would be the main battle handgun based solely on that reasoning. Most knowledgeable gun folks agree that the S&W was a better gun, I agree. 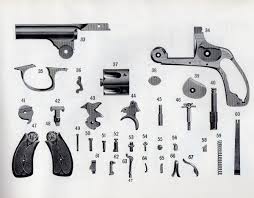 Seeing and holding my student’s aged pistol reminded me of the great history of US firearms manufacturing. The United States has produced most of the best ever designed guns. Good old American ingenuity always gives me pause to appreciate just how rich our history and our country really is.