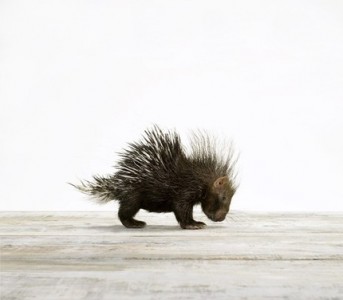 Jared Buzzell was mushroom hunting in Minot, Maine when he witnessed a porcupine get hit by a car.  According to a recent post on cbsnews.com, Buzzell had heard that a “valuable mineral deposit used in Chinese medicine formed in the stomachs of porcupines”, so he went over to the fresh roadkill and cut it open in search of this mineral, only to find a porcupine fetus that he assumed was dead.  He began to massage the baby to try and stimulate a heart beat, and he was successful!

Buzzell ended up taking the baby home to care for it and plans on caring for it until he finds a licensed wildlife rehabilitator to take over.

Start your day mushroom hunting, end up performing an unintentional C-section and save the life of a baby porcupine that would have surely otherwise not survived.  He’s a hero to that porcupine, for sure!