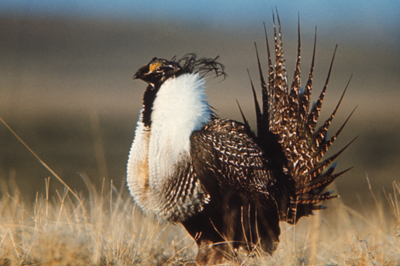 The Results Are In: Greater Sage-Grouse in Southeast Montana
By angelamontana

MILES CITY— Sage-grouse populations have been declining throughout the west for decades and currently the bird occupies only 56 percent of its’ historic range. Because of this, the U.S. Fish & Wildlife Service (USFWS) determined that the sage-grouse “warranted” federal protection under the Endangered Species Act but was “precluded” from being listed due to the backlog of other species at more imminent risk of extinction. This “warranted but precluded” status is scheduled to be reevaluated by fall of 2015.

In Southeast Montana, however, the birds have persisted at sustainable levels and the ability to sustain seems to point to the fact that many traditional landowners have maintained large expanses of intact sagebrush habitat.

During a four yearstudy conducted by FWP in partnership with the BLM in the Southeastern Montana Sage-Grouse Core Area (Core Area #13), 94 sage-grouse hens were studied in order to determine population parameters, quantify seasonal movements and gauge habitat use in order to make management recommendations. 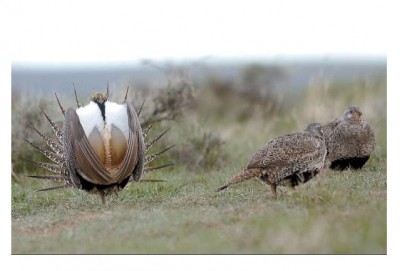 Results of the study indicate that the sage-grouse population is stable, and that current land management in the Core Area is not limiting sage-grouse persistence. Traditional family-owned ranching operations have and continue to manage the land in a manner that is compatible with sage-grouse conservation: they have maintained intact sagebrush grasslands. “Maintaining this traditional land use is the most important management action to ensure the future of sage-grouse in the Core Area,” states Melissa Foster, FWP Wildlife Biologist that headed up the study. Since ranchers must run profitable operations, they have a vested interest in the long-term sustainability of land use practices, and are well-poised to collaborate with wildlife and range professionals to maintain and improve sage-grouse habitat.

Population viability analyses have indicated that the major wild card for birds in the Core Area is West Nile virus (WNv). “We saw the population plummet following a major WNv outbreak in 2007, and it has not yet recovered to pre 2007 levels. Continued small or large-scale outbreaks of WNv are a primary threat to sage-grouse, which is frustrating because it seems there is little that we can do from a management perspective to stem the spread of the mosquito-borne virus,” said Foster.

For more information or to obtain a copy of the entire 108 page report please contact Melissa Foster, MFWP wildlife biologist, at (406) 852-2032 or mfoster@mt.gov or go to www.fwp.mt.gov.

(Report by Montana FWP; Feature photo via ammoland.com; Above photo via grousecreek.com)